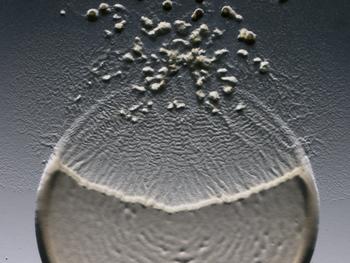 This is what it looks like when a bacterium preys.

The research team led by Dr. Christine Kaimer from the Microbial Biology department at Ruhr-Universität Bochum (RUB) has taken a close look at predatory bacteria, which feed on other bacteria. Through microscopic examinations and protein analyses, they characterized the strategies used by the soil bacterium Myxococcus xanthus: It combines several mechanisms to kill structurally different prey bacteria, and also works in groups where necessary. These observations might be useful for the future development of new antibacterial strategies.

Bacterial groups in search of food

We commonly know predator-prey relationships from the animal kingdom, but they are also a survival strategy of certain bacteria: bacterial predators actively kill bacteria of other species in order to feed on them. The predatory species include many myxobacteria, which are widespread in the soil and display unique behavioural patterns: many cells assemble into large groups and go in search of food together or, in the event of nutrient limitation, build three-dimensional fruiting bodies. “The motility mechanisms of myxobacteria are very well investigated, but there are still many unanswered questions on the molecular processes of predation and their significance in complex bacteria communities,” says Christine Kaimer.

The Bochum-based biology team is investigating bacterial predation behaviour using the model of the soil bacterium Myxococcus xanthus, which is known to use a wide range of different microorganisms as prey. “We wondered, which mechanisms these predators use to kill structurally different prey bacteria,” explains Kaimer. “To address this, we carefully observed the predation behaviour of M. xanthus against different prey under the microscope and also compared the efficacy of the different protein fractions of the predator cells.”

The experiments have shown that several mechanisms are combined in different ways: the prey cells are initially killed by a predator cell in direct cell-cell contact. For gram-negative prey bacteria with a thin cell wall, this is sufficient to dissolve the cell and access the nutrients inside. To break down gram-positive prey bacteria with a thick cell wall, the predator needs additional proteins, which are realeased into the surrounding area. “The formation of larger predator groups seems to be particularly important for this,” explains Christine Kaimer.

These findings provide an important starting point to further reveal bacterial predation mechanisms. In the future, the researchers hope to gain insights into the dynamic interactions in bacterial communities and possibly obtain impulses for the development of new antibacterial strategies.