How the coronavirus interacts with cells 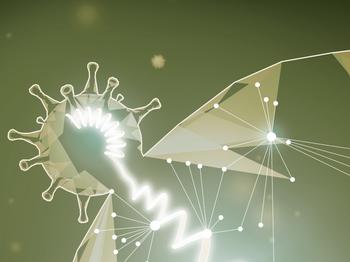 18 host proteins play an important role during SARS-CoV-2 infection – two of them are particularly interesting.

Scientists from Würzburg and the US have charted the first global atlas of direct interactions between SARS-CoV-2 RNA and human host cells. This may provide a starting point for novel treatments.

SARS-CoV-2 infections pose a global threat to human health and a formidable research challenge. One of the most urgent tasks is to gain a detailed understanding of the molecular interactions between the virus and the cells it infects. It must also be clarified, whether these interactions favour the multiplication of the virus or - on the contrary - activate defence mechanisms.

In order to multiply, SARS-CoV-2 uses proteins of the host cell. However, thus far no detailed information on the part of the human proteome - i.e. the total of all proteins occurring in human cells – that is in direct contact with the viral RNA existed.

This void has now been filled. Scientists from the Helmholtz Institute for RNA-based Infection Research (HIRI) Würzburg, the Julius-Maximilians-Universität Würzburg (JMU) and the Broad Institute (Cambridge, USA) have succeeded in creating the first global atlas of direct interactions between the SARS-CoV-2 RNA and the proteome of the human host. In addition, the authors identified important regulators of viral replication. Dr Mathias Munschauer from HIRI and Professor Jochen Bodem from the Institute of Virology and Immunobiology at JMU were responsible for the study. They present the results of their work in the journal Nature Microbiology.

In the biosafety level 3 suite at HIRI, the scientists infected human cells with the new coronavirus, which uses RNA as genetic material. In a second step, they purified the viral RNA and identified the proteins bound to it. "Mass spectrometry allows us to accurately determine the host proteins that directly associate with the viral genome. In this particular case, we were able to perform quantitative measurements to identify the strongest specific binding partners," says Mathias Munschauer.

"The atlas of RNA-protein interactions created in this way offers unique insights into SARS-CoV-2 infections and enables the systematic breakdown of central factors and defence strategies, a crucial prerequisite for the development of new therapeutic strategies," says Jochen Bodem. In total, the scientists identified 18 host proteins that play an important role during SARS-CoV-2 infection.

According to them, the two factors CNBP and LARP1 are particularly interesting. Using genetic tools, the authors identified the exact binding sites of these two host proteins in the viral genome and showed that they can specifically inhibit the replication of the virus. According to Mathias Munschauer, the characterisation of LARP1 as an antiviral factor is a major finding: "The way LARP1 binds to viral RNA is very interesting, because it is similar to the way LARP1 regulates certain cellular messenger RNAs that we already know. This in turn provides insights into possible mechanisms of action."

The multidisciplinary nature of the study also enabled the identification of 20 small molecule inhibitors of host proteins that bind SARS-CoV-2 RNA. The authors show that three out of four inhibitors tested actually inhibit viral replication in different human cell types. This result could open up new ways to treat infections with SARS-CoV-2 and other RNA viruses.