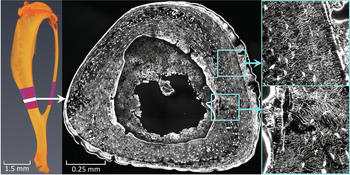 Our bones have so-called mechanosensors that react to pressure and communicate with each other. “These sensors enable that bone is formed where it is mechanically necessary and broken down elsewhere," says Richard Weinkamer from the Biomaterials Department. In their research they have come a decisive step closer to solving the mystery of where these mechanosensors are located: Hidden within a structure of canals inside the bone, a cell network "senses" external bone stress.

This works by translating the mechanical loading into a fluid flow through this fine canal network. There are similarities between the examined network and the neural network in the brain. It may be possible to draw conclusions about diseases such as osteoporosis or arthrosis, where the network has a modified architecture.

Bones can be trained like muscles. In the course of the study, researchers in Montreal examined mouse bones that had undergone controlled "bone training". In Potsdam, Weinkamer and his team used a scanning laser microscope to obtain 3D images of the cell network in the trained bones. The image data was used to analyze and evaluate networks with millions of canals by means of computer simulations that calculate the fluid flow through the network: "Based on our results, we are convinced that the bone cells within the networks can perceive the fluid flow, communicate with each other and thus pass on information such as 'need of bone growth' to other cells," says Alexander van Tol. He adds: "The examined mice reacted differently to bone training. A mouse that produced particularly little new bone has a network whose architecture allows only a slow flow of fluid". He adds: "We therefore believe that the same applies to humans: Bone can be strengthened particularly well through physical activity if the network structure within the bone 'plays along'. This study was the first to not only analyze the network architecture, but also to evaluate the quality of this architecture in terms of the perception of mechanical stimuli.