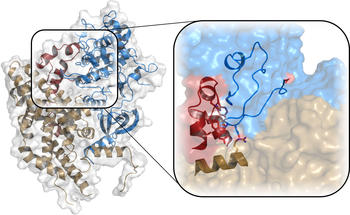 The crystal structure of the active CAK complex with the proteins Cyclin H (brown), MAT1 (red) and CDK7 (blue). The magnified section shows how CDK7 is stabilized by Cyclin H and MAT1, which is essential for the activation of the complex.

A research group from Würzburg has now been able to clarify the long-standing question of how the protein complex CDK-activating kinase (CAK), which controls the central processes of cell division and transcription, is activated. The group analyzed the active form of the protein/CAK complex and was able to decipher its function on a molecular level. These new findings provide the basis for further research on cancer drugs and were published in the scientific journal PNAS.

Cell division and transcription, i.e. the reading of genes, are among the most important tasks of a cell and are regulated very precisely, since errors in these processes can lead to fatal consequences such as cancer development. Special proteins, so-called cyclin-dependent kinases (CDK), regulate these processes through the interaction with other proteins. CDK7 is one of the most important of these kinases in humans. The structure of the kinase itself has been known since 2004, but so far, it has not been understood how the interaction of CDK7 with cyclin H and MAT1 leads to the activity of the kinase within this complex (CAK). The scientists around Professor Dr. Caroline Kisker from the Rudolf Virchow Center for Integrative and Translational Bioimaging at the University of Würzburg have now succeeded in doing so by deciphering the structure of the complex in its active form.

Exact functionality of the CAK resolved

The CAK complex plays a key role in cell cycle control and transcription. "Via the MAT1 protein, the complex can bind to the transcription factor TFIIH and thus, initiates the process of reading DNA," explains Stefan Peissert, the first author of the study.

Cyclin-dependent kinases, as their name suggests, are normally activated by cyclins. "However, CDK7 occupies a special position among the kinases, since it requires MAT1 in addition to its binding partner cyclin H to be functional," explains Kisker. The structure of the inactive form of CDK7 had been known for quite some time, but not that of the entire complex, as it was not possible to form a stable protein crystal, which is necessary for structural biology. Using X-ray crystallography, the research group has now succeeded in deciphering the structure of the trimeric complex in its active form for the first time. They were able to visualize the decisive structural changes that lead to the activation of CDK7. "Knowing exactly what happens at the molecular level helps us to understand this important protein complex," emphasizes Kisker.

In cancer cells, CAK, and thus also CDK7, is an excellent target for cancer drugs due to its central role in the cell. In certain types of cancer, inhibitors of CDK7 can slow down tumor growth. "Now that the structure of the active center of the protein complex is known, completely new targets for CDK7 inhibitors will emerge," says Jochen Kuper, who is a postdoc in the group. Another aspect that the research group will investigate in the future is the biochemical mechanism, which differentiates between the two functions in transcription and cell cycle regulation.

The fact that another research group around Prof. Dr. Eva Nogales at Berkeley University decoded the structure of the complex almost simultaneously by cryo-EM shows how highly topical the research of the CAK is. The results of the two studies complement each other and have both been published in PNAS.