Let there be light and the process stops 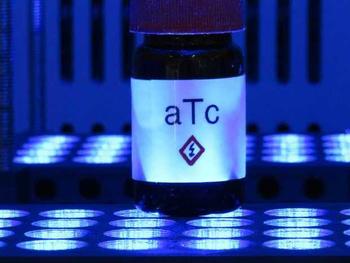 The UVA-​sensitive anhydrotetracycline can be used in cell cultures to regulate gene activities.

ETH researchers have discovered that they can use light-​sensitive molecules to switch genetic networks on and off as required. Their finding gives rise to an easy method for dynamically controlling biotechnological substance production.

Tetracycline (Tc), an antibiotic, and its derivative anhydrotetracycline (aTc) enjoy widespread use in biotechnology and synthetic biology. Both molecules influence gene expression. Tc generally inhibits the cellular machinery for the production of proteins, while aTc is used to activate specific genes. This is an indirect process in which aTc binds to a molecule attached to the corresponding gene and prevents it from being read by the cellular protein production machinery. The bond causes the complex to detach from the gene, allowing production of the protein encoded by it to begin.

However, using Tc and aTc as regulators in cell culture experiments also has its disadvantages: because both molecules remain in the culture and cannot be removed, it’s no longer possible to stop the processes that they regulate.

Now, a team of researchers led by Mustafa Khammash from the Department of Biosystems, Science and Engineering at ETH Zurich in Basel has discovered a new way around this. Like many other chemicals, Tc and aTc are by nature sensitive to light. When exposed to UVA light, they lose their ability to inhibit gene expression. The ETH researchers are now exploiting this effect to use Tc and aTc as dynamically controllable transcription and growth regulators.

“Using molecules like aTc and Tc that are naturally sensitive to light makes our lives much easier,” explains Armin Baumschlager, a postdoc in Khammash’s group and lead author of the corresponding study. Now, it is no longer necessary to insert additional genes that mediate light sensitivity into the cells used, he says. This new approach paves the way for non-​specialist research groups to work with optogenetic networks as well.

In biology, the term optogenetics refers to the use of light to control gene expression. Using this process, pulses of light can be sent to cells like E. coli bacteria to induce a certain response, triggering for instance the production of a protein. Besides substances like Tc or aTc, light-​sensitive enzymes can also be employed for this purpose. To achieve this, scientists have created complex genetic networks and incorporated the genes of these enzymes. But these also have a drawback because they remain active only if they are permanently exposed to light.

Light-​sensitive substances thus enable a network to be switched both on and off. Adding a certain amount of aTc to the cell culture switches the network on. A quick way to then stop the process completely after a given amount of time is to expose the culture to UVA light. “Using light to inactivate aTc has the same effect as removing the substance from the system,” Baumschlager says.

If you want to resume the process, he continues, you add aTc to the cell culture again. “It’s possible to repeat such cycles several times without damaging the cells. In this study, we’ve shown just how well we can regulate the temporal aspect of activation and inactivation,” he explains.

Utilising molecules’ sensitivity to light to control biological processes allows researchers to develop novel control schemes for biotechnology. So far, the scope of the ETH researchers’ testing has been limited to the test tube, but they are currently working on scaling things up and planning experiments using bioreactors with a volume of several litres. It would also be possible to employ other light-​sensitive molecules as regulators – different antibiotics for instance.

One potential use for the method is to produce certain proteins, such as antibodies or essential vitamins, for therapeutic purposes. By adding or inactivating aTc, their production can be precisely controlled to deliver the optimum result. “Due to the simplicity of its use and development, our new method is likely to become an attractive prospect for the pharmaceutical industry,” Baumschlager says.