"Explosion in cancer genome" much more common than expected 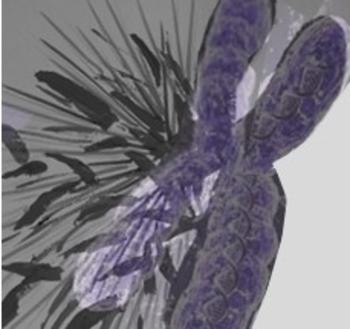 Chromothripsis is a form of genome instability by which one or a few chromosomes virtually "explode(s)" in a presumably single catastrophic event. According to current opinion, chromothripsis occurs at the beginning of tumor development and plays an important role in cancer onset. While the phenomenon was previously considered to be rather rare, scientists at the German Cancer Research Center have now shown that chromothripsis is detectable in almost half of all tumors.

The damage pattern of "chromothripsis", which has only been known for about ten years, differs from previously known genetic defects in tumor cells. Sections of one or a few chromosomes are broken in countless places and reassembled in an irregular manner, so that entire sections of the genetic material are missing, while others are duplicated or inserted in the wrong orientation.

Until now, it has been assumed that this genetic disaster occurs in only two to three percent of cancer cases. However, in a recent study, scientists led by Aurélie Ernst at the German Cancer Research Center (DKFZ) are now using highly sensitive analytical methods to show that the frequency of chromothripsis has so far been considerably underestimated. In collaboration with the NCT/DKTK MASTER program, the DKFZ researchers examined 634 tumor samples from 28 different types of cancer, covering all major cancers in adults. They found traces of the chromosome explosion in 49 percent of all patients examined.

Chromothripsis was particularly frequent in tumors of patients who had inherited a mutation from their parents that predisposes them to develop cancer. In addition, in various types of cancer chromothripsis occurred more frequently in certain chromosomal regions than would be the case with a purely random distribution. The researchers conclude from this that in these cases the chromosome explosion gives the cells a survival advantage.

In addition, the scientists gained important insights into the evolution of tumors: Previously, they had suspected that chromothripsis usually occurs at the very beginning of the tumorigenesis or even initiates cancer onset. But the current results paint a different picture: In patients from whom tumor samples were taken several times during the course of the disease, it was found that in some cases only individual subclones were affected by the chromosomal disaster. In other cases, the researchers found chromothripsis only in the tumor relapse, but not in the primary tumor.

Of high clinical relevance is the observation that chromothripsis often generates fusions of chromosomal fragments that promote tumor development. This may, for example, be due to the fact that a growth-promoting gene comes under the influence of a strong activator as a result of the fusion. "A number of scientific publications have already shown that in such cases, it is sometimes possible to slow down tumor growth with targeted drugs," explains senior author Aurélie Ernst.