Corona: vaccination without a needle? 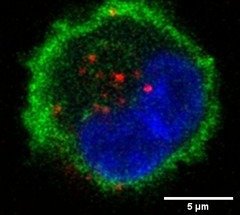 Cross section of a Langerhans cell (membrane in green). Internalized nanoparticles are shown in red.

The Max Planck Institute of Colloids and Interfaces in Potsdam and the Technology Transfer Fund KHAN-I are developing a vaccine procedure for SARS-CoV2 together with the Lead Discovery Center in Dortmund. The researchers hope that within the next few years, they will be able to establish immunity to and protection from the virus using targeted vaccine transport via the skin.

SARS-CoV2 has already infected more than 3.6 million people worldwide, and is responsible for over 250.000 deaths. The number of unreported cases is estimated to be significantly higher. The pandemic is affecting the everyday life of billions of people, with long-term severe consequences for the global economy and health systems. Industry and academia are currently applying many different approaches to the rapid development of effective, sustained immunization in order to avoid the drastic measures required to prevent the spread of such diseases.

Vaccines are the only possibility for defeating an infectious agent in the long term. In the case of SARS-CoV2, novel vaccine technologies that can quickly be adapted to new viruses are being pushed, particularly those based on the application of nucleic acids or the use of adenovirus vectors. Nearly all these technologies involve the injection of the vaccine into the patient’s muscle. The concentration of immune cells is, however, higher in the skin than in muscle. So-called Langerhans cells are also present in the skin, and these activate and coordinate the body’s antiviral response.

The central role in the LC-TDS is played by a highly specific chemical component that enables exclusive binding to Langerhans cells, where the efficient release of vaccine can then take place. By adapting existing LC-TDS technology to SARS-CoV2, researchers at the Max Planck Institute of Colloids and Interfaces – with the help of the swiftly mobilized KHAN-I financing – now aim to develop a rapidly available vaccination procedure in cooperation with the LDC in Dortmund. “The KHAN-I financing marks the first step for LC-TDS technology on the road to future entrepreneurial independence as Cutanos GmbH, which we look forward to with high hopes for wide-ranging applications,” says Bert Klebl, CEO of KHAN-I, adding: “Further investors are welcome.”

“With the KHAN-I-funded collaboration between the LDC and the Max Planck Institute, extraordinarily competent partners have been brought together, and an excellent way has been found to quickly make this promising LC-TDS technology available for the development of a SARS-CoV2 vaccine,” adds Mareike Göritz, Patent & License Manager at the licensor and contractual partner Max Planck Innovation.