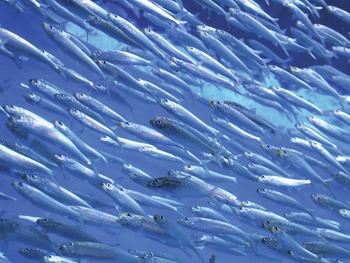 Photo by Kate on Unsplash

Bioprocess engineers Anja Lemoine and Stefan Junne are researching substitutes for fishmeal and fish oil in aquacultures by fermenting waste into different acids and then feeding these to microalgae.

While others stockpile food, Lemoine and Junne hoard leftovers in the fridges of the Chair of Bioprocess Engineering at TU Berlin. “Our fridges are full of what would otherwise land in the garbage,” laughs Dr. Anja Lemoine. Food waste from canteens, commercial kitchens, and restaurants is highly coveted by the two researchers. They ferment the waste into different acids and then feed these to microalgae. In turn, these microalgae synthesize the acids into the six-fold unsaturated fatty acid docosahexaenoic acid (DHA), an omega-3 fatty acid vital for the human brain and retinas.

Feeding the microalgae with food waste or other biogenic waste such as grass, leaves, or bark to synthesize DHA is a new approach being pursued by the TU scientists. While they could do the same with pressed sugar beet, which would also be much simpler, this would go against their philosophy. They aim to avoid using food or feed for their bioprocesses as much as possible and thus have settled on waste to create closed-loop material cycles. “We find this to be a more sustainable approach”, says Dr. Stefan Junne.

Great hopes are being pinned on the microalgae and their ability to synthesize the polyunsaturated fatty acid DHA from biogenic waste. Drs. Lemoine and Junne aim to use these microalgae to significantly reduce the amount of fishmeal and fish oil found in fish food for aquacultures as these are obtained from a valuable resource: the millions of tons of sardines, anchovies, mackerel, and crustaceans - the so-called small fish - removed from the sea’s food chain.

Aquacultures were once considered the solution to a man-made problem. However, they have long since become a part of the problem: the overfishing of lakes and seas. By breeding freshwater and saltwater fish in aquacultures in ponds, rivers, along coasts, and in seas, the aim was to revive decimated wild fish populations without humans needing to forgo fish as a healthy nutritional source. But, due to the enormous and consistently increasing demand for fish and seafood worldwide, aquacultures have quickly mutated into industrially-operated fish farms, a kind of factory farming underwater – with disastrous consequences.

Wastewater from the aquacultures polluted with chemicals and antibiotics is directed into seas and rivers. Even more absurd, however, is the fact that overfishing has by no means been stopped. It has merely been shifted one step further along the food chain. To breed one ton of farmed fish, roughly 2.5 tons of wild fish, that is small fish, are needed.

“We are currently seeing an increase and expansion of aquacultures worldwide. These produce 170 million tons of fish annually and thus have significantly exceeded the amount of fish caught in the wild (90 million tons annually). The resulting need for small fish is tremendous. Yet, in the meantime, the production of fishmeal and fish oil has stagnated because fisheries have been fished dry. The price for a ton of fish oil has consequently doubled in the past ten years. Depending on the quality, it can cost USD 200 or more per ton,” states Junne.

The fish meal and fish oil in fish feed cannot be easily omitted in fish farming, though, because, as previously mentioned, the meal and oil contain the essential polyunsaturated fatty acid docosahexaenoic acid (DHA). DHA accounts for up to 97 percent of the omega-3 fatty acids in the human brain and up to 93 percent in our retinas. “The polyunsaturated acids are what make fish such a healthy source of nutrition for humans,” explains Lemoine.

Small fish absorb DHA by feeding on microalgae. The fish themselves are unable to produce DHA. This is where the TUB bioprocess engineers enter the picture. “In order to increasingly replace the amount of fishmeal and fish oil in fish food, we are investigating ways to produce the DHA through biotechnology using microalgae,” says Junne.

But fishmeal and fish oil in fish food are also an important source of protein. Lemoine and Junne are substituting this with specific yeast strains. Currently, this algae-yeast mix produced by the TU scientists is added to a fish feed fed to rainbow trout and pikeperch at the Institute of Inland Fisheries Potsdam. The challenge is ensuring the meat of the fish fed with this substitute has the same characteristics as that of fish fed with conventional fishmeal and fish oil. There cannot be a noticeable difference to the consumer. “We were able to show that when replacing a quarter of the fishmeal and fish oil in conventional feed with our algae-yeast mix, the fish demonstrate a similar quality,” reports Junne.