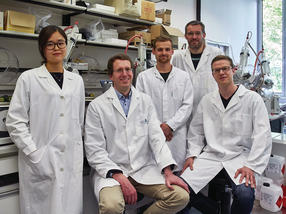 Microorganisms often assemble natural products similar to product assembly lines. Certain enzymes, non-ribosomal peptide synthetases (NRPS), play a key role in this process. Biotechnologists at Goethe University have now succeeded in changing these enzymes so that entirely new natural products, or even libraries of natural products, can be produced by microorganisms.

Many important natural products such as antibiotics, immunosuppressants, or anti-cancer drugs are produced by microorganisms. These natural products are often small peptides, which in several cases are too complex for a chemical synthesis in the laboratory. In the microbial producers of these drugs, the drugs are generated with the help of the NRPS enzymes in a manner similar to a modern automobile factory: at each station, additional parts are added to the basic structure until finally a complete automobile leaves the factory. In the case of NRPS, a specific amino acid is incorporated and processed at each station (module) so that in the end, peptides emerge that can be linear, cyclic or otherwise modified, and which can also carry unusual amino acids.

Although the basic principles of NRPS have been known for a long time, it was previously hardly possible to modify these enzymes in an easy and efficient way that also allows the complete assembly of fully artificial enzymes leading to new-to-nature peptides. While in the past NRPS modification usually led to a dramatic drop in the production titre of the desired modified peptides, the Molecular Biotechnology research group of Professor Helge Bode already published a new method in 2018 that avoided this drawback. The group has now further optimized this method allowing the easy production of new peptides in excellent yield.

“We use fragments of natural NRPS systems from different bacteria as building blocks that we connect to each other using specific assembly points we have identified,” Andreas Tietze and Janik Kranz explain the research approach they developed as part of a larger team in the Bode group. “The yields are comparable to the natural production of the non-modified natural products and the new methods also enable the simple production of peptide libraries, which was not possible before”.

The method is so well established, beginners can use it to produce new peptides after a short training period. But to get to this point was a long way. “Following the first promising experiments by Kenan, my PhD student at the time, we worked for a long time on the project with a major part of my group until we were certain that our method fulfilled the requirements of a robust and easily reproducible engineering method,” Bode states. “Thanks to the LOEWE priority programmes MegaSyn and Translational Biodiversity Genomics, we had the necessary personnel and financial support, and could concentrate completely on the project.”

The next step is to modify the first clinically relevant drugs with this method and produce them in microorganisms applying biotechnology methods. The conditions for this are good - Bode was only recently awarded one of the renowned ERC Advanced Grants from the European Research Council in order to further optimize the methods over the next five years.