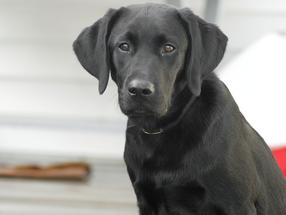 Both dogs and humans suffer from inherited eye disease leading to vision impairment and blindness. In children and young adults, Stargardt disease is one of the most common forms of inherited retinal degenerative diseases. An international team led by researchers from SLU (The Swedish University of Agricultural Sciences) has now for the first time identified a mutation in the ABCA4 gene resulting in a similar disease in Labrador retriever dogs. The findings, published in PLOS Genetics, will be important for breeding healthy dogs and to develop novel treatments including gene therapy for human patients.

The Labrador Retriever is one of the most popular dog breeds in the world and is commonly used as guide dogs for humans with vision impairment and blindness. Labradors like other dog breeds can also suffer from inherited blinding diseases like Progressive Retinal Atrophy (PRA) caused by degeneration of photoreceptor cells, the rods and cones in the retina. In humans this disease is called retinitis pigmentosa (RP). Neither PRA nor RP, is a single disease but rather a collective name for several diseases characterized by a progressive degeneration of the photoreceptor cells. Until now, only one mutation in the photoreceptor disc component (PRCD) gene has been found to cause inherited retinal degenerations in Labrador retriever dogs.

“Ten years ago, a Labrador retriever dog with visual impairment was examined clinically but surprisingly, its retinal disease was not caused by the previously known mutation in the PRCD gene. This became the start of a new research project” says Tomas Bergström, who directed the study.

To investigate the genetic basis for this novel form of inherited retinal degeneration, scientists from SLU sequenced the complete genomes of an affected sib-pair and their unaffected parents. This resulted in the identification of an insertion of an extra nucleotide in the gene called ATP binding cassette subfamily A member 4 (ABCA4). In healthy dogs, ABCA4 plays a vital role during the normal visual cycle when light hits the eye. The international team of scientiststhen showed that affected dogs cannot produce a functional ABCA4 protein.

“The effect of this mutation is that toxic byproducts produced when the photoreceptors detect light, will cause cell death and lead to visual impairment. These changes come slowly and some dog owners may see them as a normal age-related decline of vision while working Labrador retriever owners might notice underperformance in for example retrieving dummies and birds during hunting” says Suvi Mäkeläinen, the first author of the study.

As dogs have an eye similar to the human eye it has been a long-time interest to use dogs in comparative genetic studies. In humans, mutations in the ABCA4 gene are the major cause of Stargardt disease. This is a retinal degenerative disease affecting about 1 in 8,000-10,000 children and young adults. The disease progression appears to be similar in Labrador retriever dogs.

“We hope that the results of this study will not only support breeding of healthy dogs, but also enhance the development of new treatments for children and young adults with Stargardt disease” says Tomas Bergström.