Probably relevant to other cellular transport as well 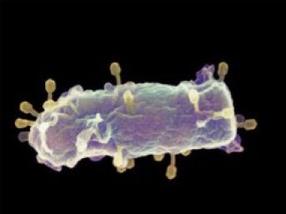 The manner in which some viruses inject their DNA into bacteria or other types of cells, appears to be much simpler than scientists had previously thought. Rather than using molecular engines or complicated mechanisms, viruses let simple physics do the work for them. This is a recent finding by Prof Willem Kegel at Utrecht University and colleagues at the University of California Los Angeles (UCLA), and the California Institute of Technology (Caltech).

The driving force behind the initial and fast step, is the high pressure inside the virus. The second step, which takes much longer to complete, appears to be diffusion; a direct result of the random movement of atoms and molecules. The researchers expect that this diffusion mechanism may also be responsible for other transport processes inside the cell and between cells.

Viruses have several strategies for inserting their DNA into the cell of their ‘host’, which is a necessary step in their reproduction process. This study examined phages; viruses that infect bacteria. These viruses infect their hosts in a manner comparable to that of other viruses, such as herpes viruses, which cause unpleasant symptoms in humans.

Other transport processes inside the cell

“We expect that the mechanism we have discovered plays an important role in infections by this type of virus”, according to research leader Prof. Willem Kegel from Utrecht University. “We also think that the diffusion mechanism we found may also be responsible for other transport processes inside the cell, such as the transfer of genes between bacteria, protein transport inside cells, and the transport of messenger RNA through the pores in the cell nucleus.”

Pressure of around 60 bar

A phage consists of a head and a tail. The tail acts as an injection needle that can penetrate the cell membrane. The DNA is stored in the head of the phage, and exerts a pressure of around 60 bar. That is equivalent to 20 times the pressure in a fully inflated car tyre, or the pressure at 600 meters under water. Once the tail of the phage penetrates the cell, the ‘valve’ opens and the DNA is injected into the cell at high speed. This quickly releases the pressure of the DNA inside the phage. An outstanding question facing the researchers was therefore: what forces the last portion of DNA to enter the cell once the pressure has been released?

Nothing but the pressure

In an experiment, the researchers determined the speed of the DNA transport from phage to cell in phages in which only the initial pressure was different. In both cases, the researchers observed two distinct steps. Calculations confirmed their suspicion that the driving force in the first step is indeed the pressure, and nothing but the pressure.

However, in both phages, the DNA transport in the second stage occurred at equal (slow) rates. Moreover, the injection speed appeared to depend only on the amount of DNA that had already been injected into the cell. This suggested that the only factor that could play a role in the injection speed, aside from the DNA itself, was the characteristics of the cytoplasm of the cell.

Cytoplasm is in fact a ‘colloidal solution’: proteins and other large molecules inside a cell have colloidal dimensions, and move more or less freely in an aqueous substance. Kegel has considerable research experience with colloidal systems, which made it possible to translate the experimental data into a theoretical model.

This enabled the researchers to prove that the observed injection speeds could be explained by the simplest scenario imaginable: diffusion, or the random movement of the injected DNA through the cytoplasm. “The speed at which the phage’s DNA moves in the host’s cytoplasm can in a straightforward way be determined using the physics of colloidal systems”, according to Kegel.