Botulinum-type toxins jump to a new kind of bacteria 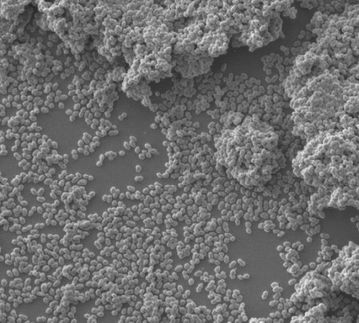 This is a scanning electron microscopy photomicrograph of Enterococcus. 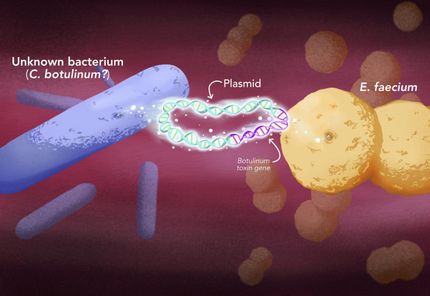 Botulinum toxin was able to jump into a new type of bacteria, Enterococcus, through plasmids, mobile structures that contain DNA independently of the chromosomes and can be swapped from one bacterium to another. 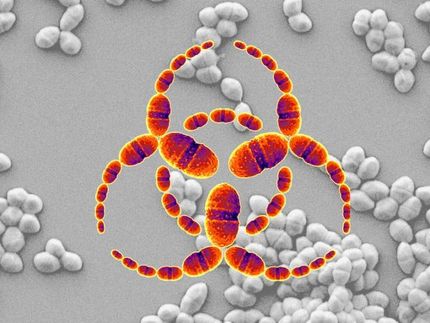 The appearance of a botulinum-like toxin in Enterococcus -- a ubiquitous bacterium and an emerging cause of multidrug-resistant infections -- is raising scientific concern.

Enterococci are hardy microbes that thrive in the gastrointestinal tracts of nearly all land animals, including our own, and generally cause no harm. But their ruggedness has lately made them leading causes of multi-drug-resistant infections, especially in settings like hospitals where antibiotic use disrupts the natural balance of intestinal microbes.

So the discovery of a new toxin in a strain of Enterococcus is raising scientific eyebrows. Isolated from cow feces sampled at a South Carolina farm, the bug was unexpectedly found to carry a toxin resembling the toxin that causes botulism.

"This is the first time a botulinum neurotoxin has been found outside of Clostridium botulinum -- and not just the toxin, but an entire unit containing the toxin and associated proteins that prevent the toxin from being degraded in the GI tract," says Min Dong , PhD, a scientist in Boston Children's Hospital's Department of Urology and Harvard Medical School and one of the world's experts on botulinum toxins.

Should we be scared?

No, at least not yet, says Sicai Zhang, PhD, a postdoctoral fellow in Dong's lab and one of three co-first authors authors on the new report.

"The enterococcal isolate carrying the toxin luckily remains susceptible to key antibiotics," notes Zhang. "It was found only once from a single animal, and no signs of botulism disease were observed."

When Sicai and his colleague Jie Zhang, PhD, tested the toxin in rodents in the lab, it had little or no effect. Only when they manipulated the toxin to better target mouse and rat neurons did it become potent, shutting down nerve function and causing paralysis.

Is BoNT/En toxic to humans? Dong's lab is now testing it in cultured human neurons to find out.

How could this botulinum toxin jump from one bacterial species to another? Teams led by Dong's collaborators, Michael Gilmore, PhD , at Massachusetts Eye and Ear and Harvard Medical School, and Andrew Doxey, PhD , at the University of Waterloo, found that the BoNT/En botulinum toxin genes were carried by a plasmid.

Plasmids are mobile structures that contain DNA independently of the chromosomes, and can be swapped from one bacterium to another. Plasmids are quite common in enterococci: in fact, they have been associated with the acquisition of resistance to vancomycin, a last-resort antibiotic, and transfer of resistance to the fearsome Staphylococcus aureus.

This ability to swap genes is what worries scientists. Could a potent toxin from C. botulinum end up in a multi-drug-resistant E. faecium strain? It now seems theoretically possible.

"Enterococcus is a central hub for gene transfer within the gut, and that makes it potentially scary," says Dong.

Down on the farm

Gilmore's lab sequenced the toxin producing E. faecium strain as part of a much wider search for the origins of enterococcal antibiotic resistance and disease-causing ability.

"We were not looking for a neurotoxin in E. faecium," says Francois Lebreton, PhD , another co-first author on the paper who specializes in examining the genome sequences of these microbes. "There was no reason to suspect its existence."

Lebreton has been investigating the evolution of enterococci from its commensal Paleozoic origins its rise as a hospital threat .

"In intensive agriculture, antibiotics are administered to farm animals to promote weight gain in often crowded facilities. We believe that this creates an environment in the animal gut that allows antibiotic-resistant enterococci to thrive and come into contact with humans," he explains. "We know that the highly antibiotic-resistant E. faecium strain we fight in the hospital is very closely related to strains found in the GI tracts of farm-raised animals."

From farm to computer

"The way that we discovered this toxin using computational methods is different from how toxins used to be identified in the past, and may become a standard approach in biomonitoring" says Doxey. "It represents scientific collaboration and data sharing at its best."

The newly discovered toxin does raise some concern that botulinum toxin could turn up in antibiotic-resistant enterococci, perhaps stemming from gene transfer in the gut of an animal harboring both C. botulinum and Enterococcus.

"This is a unique discovery of a botulinum neurotoxin in a bacterium that is both ubiquitous in animals and a serious problem in human health," says Lebreton. "E. faecium is in the gut of nearly every human; it is extremely tough and survives a lot of stresses, often including efforts to disinfect hospital surfaces. A hospital-adapted, antibiotic-resistant, hard-to-kill bug carrying a neurotoxin would be a worst-case scenario."

Exactly what animal this ninth botulinum toxin is meant to target remains unknown. Gilmore's lab continues to expand and study its collection of enterococcal isolates. "Most of what we know about Enterococcus comes from the few strains circulating in the hospital," says Lebreton. "It's possible that BoNT/En, or even other novel toxins, will turn up in other enterococci isolated from the wild. We just never looked for those before."