When the "guardian" and the "caretaker" of the genome join forces 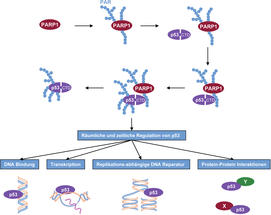 A molecular mechanism deciphered: Once activated, e.g. through DNA damage, the enzyme PARP-1 forms the biopolymer PAR (poly(ADP-ribose)). PAR, in turn, initiates binding to the tumour-suppressor protein p53 in the region of the C-terminal domain (CTD). PARP-1 will then modify p53 with the PAR biopolymer. As depicted in the lower part of the picture, these molecular processes have far-reaching implications for a number of biochemical and cellular functions that play an important role in tumour biology.

Achievement in the field of cancer research: Biologists and chemists at the University of Konstanz decipher a molecular mechanism of the cell with relevance for the development of cancer and the fight against that disease. Particularly important is the interaction between the tumour-suppressor protein p53, known as the "guardian of the genome", and the enzyme PARP-1, the "caretaker of the genome". The research project was carried out in collaboration with the University of Ulm and the Karlsruhe Institute of Technology (KIT), and the findings were published in the scientific journal Nucleic Acids Research (NAR).

Every single day, internal and external influences such as metabolic processes, inflammatory reactions, environmental toxins and radiation cause thousands of random damages to the genetic material (DNA) of every cell of the human body. If the cell cannot "repair" these DNA damages in time, mutations and the development of cancer might be the result. Normally, if a cell is at risk of turning into a cancer cell, the protein p53 will be activated. p53 triggers several molecular processes that bring cell division to a stop ("cell cycle arrest") and improve the accuracy of DNA repair. "Through this arrest, the cell gains time to repair dangerous DNA damage or, if there is an overwhelming load of damage, triggers programmed cell death ('apoptosis')”, says toxicologist and biochemist Dr. Aswin Mangerich, who heads the project at Professor Alexander Bürkle's Chair of Molecular Toxicology at the University of Konstanz. "In this way, p53 counteracts the development of cancer and is therefore also known as the 'guardian of the genome'", says Mangerich.

The protein p53 is highly relevant for biomedicine: In one half of all human tumour types, the p53 gene is mutated (irreversibly changed), whereby its cancer-combating function is suppressed. These mutations give the cancer cells a survival advantage, since the important defence mechanisms of DNA repair and programmed cell death are turned off.

The scientists from Konstanz have now deciphered the molecular mechanism how the biochemical and cellular functions of p53 in interaction with the enzyme PARP-1 are controlled. "PARP-1 helps to coordinate DNA repair processes in the cell, and this is why it has been nicknamed the 'caretaker of the genome'", says Aswin Mangerich. Dr. Arthur Fischbach, who is the lead author of the paper and worked on the project during his doctoral thesis, adds: "The enzyme PARP-1 detects DNA damage, is activated and forms the biopolymer poly(ADP-ribose) as one of the first reactions of the cell. In our paper we report the discovery that p53 first has to engage in a non-covalent (loose) binding to existing biopolymer. Only then, in a second step, can covalently (firmly) attached biopolymer be produced right on the p53 protein. This modification of p53 has far-reaching implications for the regulation of biochemical and cellular functions of p53." The 'guardian' and the 'caretaker' of the genome join forces in case of danger to a cell, with the caretaker calling in the guardian and telling him what to do.