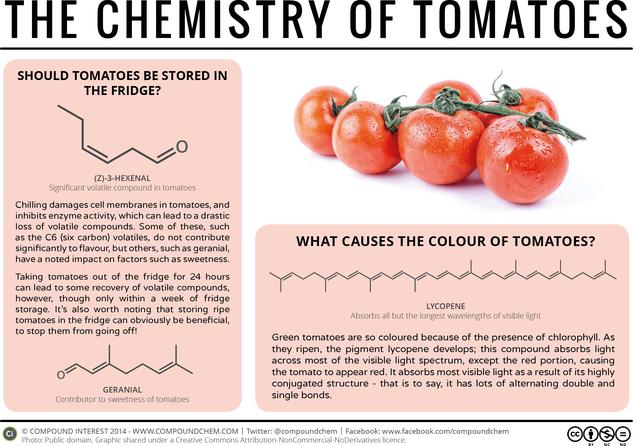 You may have previously come across the advice that tomatoes shouldn’t be refrigerated, but should be stored at room temperature, in order to maximise their flavour. To understand the reasoning behind this, we need to take a look at the chemical compounds that give tomatoes their flavour, and the effect that refrigeration has on the production of these.

Let’s first consider the compounds we’re talking about in the first place. Volatile compounds are those that easily evaporate at room temperature, and are responsible for the aromas, and to an extent flavours, of foods. For most foods, a complex mixture of compounds goes into producing the aroma and flavour, and tomatoes are no different. Over 400 volatile compounds have been detected in tomatoes, but of these, researchers have narrowed it down to around 16 key compounds that are associated with flavour and sweetness.