The Chemistry of Stinging Nettles 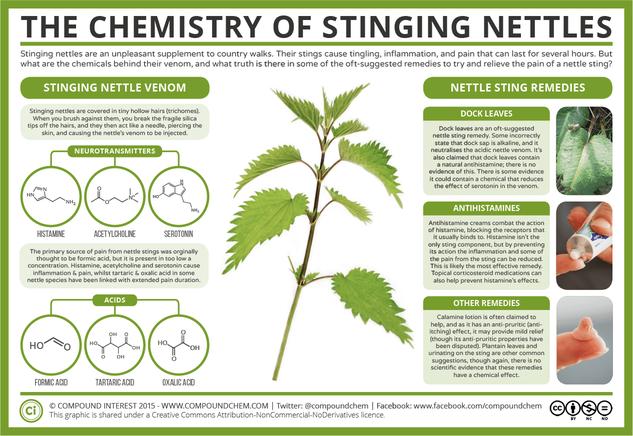 The Chemistry of Stinging Nettles

Doubtless the majority of people reading this will, at some point in their life, have had the unpleasant experience of being stung by stinging nettles. But what chemicals do stinging nettles contain that elicit this effect? Further to that, a commonly espoused remedy for the stings, in the UK at least, is to rub dock leaves on them – but does this actually work, or is it just a widespread myth? This graphic sorts the nettle sting remedy fact from the fiction.

The nettle species, Urtica dioica, actually encompasses six different subspecies, all but one of which have stinging hairs. It is more common in areas with moist soil – which explains its ubiquity in the UK! It’s also abundant in Asia, North America, much of Europe, and even some Northern African countries. Despite it being so widespread, however, there’s still a lot we don’t know about stings from stinging nettles.

What we do know well is how they occur. Stinging nettles are covered with countless tiny hollow hairs called trichomes. When something brushes against these hairs, their very fragile silica tips break off, and the remainder of the hair can then act like a needle. It pierces the skin, and releases a cocktail of various chemicals from the base of the hair, and it’s these that cause the sting.