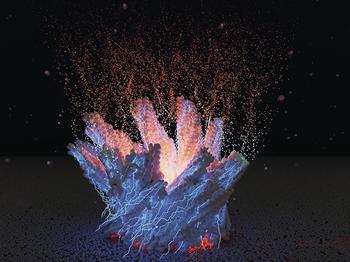 The filaments of the enzyme HDCR, which produces formic acid from gaseous hydrogen (H2) and carbon dioxide (CO2), are wound around each other like a plait.

The steadily worsening climate crisis caused by the accumulation of carbon dioxide (CO2) in the atmosphere makes the search for ideas to store CO2 increasingly important. Prof. Ben Engel's team at the Biozentrum of the University of Basel together with colleagues from the Universities of Frankfurt and Marburg, has now shed light on the structure of an enzyme that reveals a new way of storing CO2.

The unusual enzyme HDCR produces formic acid from gaseous hydrogen (H2) and carbon dioxide (CO2), thus removing CO2 from the environment and storing it in the cell. In this process, HDCR transfers electrons from hydrogen to the CO2. This is the first known enzyme that can directly use hydrogen as an electron source for CO2 storage. The enzyme HDCR was discovered in the heat-loving bacterium Thermoanaerobacter kivui, originally found in 1981 in Lake Kivu in Central Africa. It lives in environments that have little oxygen, such as the deep sea. The research teams from the Universities of Basel, Frankfurt (Prof. Volker Müller) and Marburg (Prof. Jan Schuller) have now successfully elucidated the structure of HDCR. The results have now been published in Nature.

The enzyme HDCR is composed of long filaments. This thread-like structure acts like an electron-conducting ‘nanowire’ that is evidently responsible for the extremely efficient conversion rates of the two gases. “It is the structure of the enzyme that makes high-speed CO2 storage possible,” explains Dr. Ricardo Righetto, one of the first authors of the study at the Biozentrum of the University of Basel. The researchers found this enzyme to be faster than any previously known chemical catalyst performing this reaction.

The scientists applied complementary cryo-electron microscopy approaches to understand how HDCR works. First, they imaged filaments purified in the lab, which allowed the atomic structure of the enzyme to be determined. This made details of the filaments visible, revealing how the ‘nanowire’ contains thousands of electron-conducting clusters of iron and sulfur atoms, which allow electrons to be efficiently passed from hydrogen to CO2. The scientists believe that the ‘nanowire’ can also store the electrons from hydrogen when even just one hydrogen bubble passes by the bacteria.

They then performed tomography of frozen cellular sections to image native HDCR structures inside T. kivui cells. This cutting-edge technique revealed that the filaments twist around themselves several times like a metal cable. "We were really surprised to not only confirm the occurrence of HDCR filaments in the cells but to find they form large bundles attached to the membrane," says Righetto. “These super-structures look like circular ‘portals’ on the membrane. This arrangement might be important to increase the efficiency of the enzyme for the bacteria to obtain energy under such extreme conditions.”

The steadily worsening climate crisis caused by the increasing accumulation of CO2 in the atmosphere makes it essential to develop new ideas for capturing and storing CO2. "The HDCR structure shows us a new way to efficiently store CO2 by using hydrogen as an energy source," says Prof. Ben Engel, group leader at the Biozentrum, University of Basel. "This could turn out to be very useful for future biotechnology applications. At the same time, our study demonstrates the value of fundamental scientific research that explores the biology of diverse organisms. Nature is full of amazing surprises!"