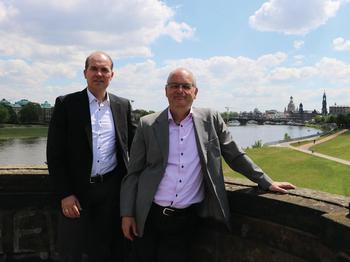 HiperScan, a Dresden-based technology company, is a specialist in near-infrared (NIR) spectroscopy and emerged in 2006 as a spin-off of the Fraunhofer Institute for Photonic Microsystems IPMS, developing innovative analysis systems for pharmacies and other industries. With its Apo-Ident analysis system, which is specially designed for the identification of raw materials and is used in over 5,500 pharmacies, HiperScan has become the leader in this market segment in Germany and currently employs over 50 people.

The innovative scanning grating technology developed at Fraunhofer IPMS forms the basis for the near-infrared (NIR) spectrometer developed by HiperScan. The analytical systems make it possible to significantly reduce investment costs to make NIR-analytics affordable even to small companies. As early as 2004, Dr. Alexander Wolter, then a scientist at Fraunhofer IPMS and now managing director of HiperScan, approached Fraunhofer with his spin-off idea. The spin-off took place in 2006 and Fraunhofer acquired a stake in the company in 2007. Additional Fraunhofer funding with the goal of further management expansion followed. The company was financed by the High-Tech Gründerfonds (HTGF) and the Technologiegründerfonds Sachsen (TGFS), among others. In addition to other shares, Fagron now takes over all Fraunhofer shares.

"Thanks to the successful collaboration with Fraunhofer IPMS in Dresden, we were able to launch Apo-Ident, a highly innovative product, within just a few years and quickly become the market leader for fast and reliable outgoing substance testing in German pharmacies. As a former scientist who knows the institute in the north of Dresden from the inside, it was easy for me to rely on the competence and professionalism with which work is done here right from the start. After more than 15 years as an entrepreneur, I am pleased that our long-term strategy is confirmed with the inclusion in the Fagron Group and receives additional tailwind for international expansion," explains Dr. Alexander Wolter, Managing Director at HiperScan.

Fagron is a leading global company active in pharmaceutical compounding, which is focused on delivering personalized medicine to hospitals, pharmacies, clinics and patients in 35 countries around the world. Founded in 1990, the company has more than 3,000 employees. By joining the Fagron family, new markets may open up for HiperScan’s technology to further increase safety in order to accelerate the future of personalizing medicine.

"The technological foundations for the successful HiperScan analytical system were developed at Fraunhofer IPMS. Now we are pleased about the share sale to the renowned company Fagron and continue to be available for small series production of the micromechanical heart of the NIR system," concludes Prof. Dr. Harald Schenk, Institute Director at Fraunhofer IPMS.