Microbes and viruses – a threat to Mars? 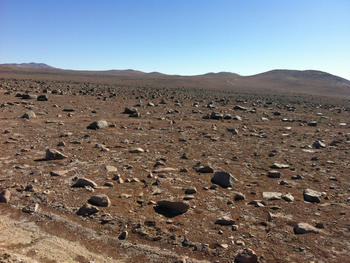 Microbes and viruses: Prof. Alexander Probst's international team took samples from under these rocks in the Atacama Desert.

Viruses are survivors! Desert heat and desiccation can’t harm some of them. „We find viruses and microbes in the driest and most radiation-intensive, non-polar region on Earth, which is really amazing,“ says Prof. Dr. Alexander J. Probst from the Environmental Biology and Biotechnology Department at the University of Duisburg-Essen (UDE). An international team led by Probst discovered the viruses and microorganisms in the Atacama Desert.

The Atacama Desert stretches along Chile’s Pacific coast over 100,000 square kilometres. It is one of the most arid places in the world. Annual precipitation averages 0.5 mm, which is less than for the Death Valley in California.

„We found very specific microbes called Archaea to dominate the driest parts of the Atacama – which goes beyond our current knowledge,“ says microbiologist Probst. More precisely, the researchers came across ammonia oxidizing archaea that have developed numerous resistances. They occur under rock-covered parts of the desert, where they are protected from UV radiation. The boulder fields cover up to a quarter of the hyperarid core of the Atacama Desert. Nobody had considered the soil beneath the boulders as a special habitat.

„We also found viruses in the desert that infected bacteria and spread over 200 km,“ the UDE scientist reports. For space travel, he says, this finding is quite important. „The Atacama Desert is considered a Mars analog.“ When terrestrial life hitchhikes on a spacecraft to the red planet, it probably spreads widely, as the viruses’ dispersal patterns showed. In addition, he said, there could be possible zones of life under Martian rocks, just as they are in the Atacama despite desiccation. „The findings bolster our understanding of deserts in terms of carbon and nitrogen turnover. Because of climate change, after all, deserts are continuousl expanding.“