A bacterium that protects the liver from alcohol damage 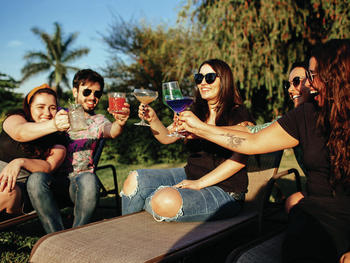 Broccoli and green vegetables offer good protection against alcohol-induced fatty liver disease. This was proved by current research into how the gut protects the liver from alcohol-related damage.

What exactly happens in the body when alcohol damages the liver? A researcher at the Medical University of Vienna has uncovered the chain of mechanisms – which already begin in the digestive tract – behind alcohol-induced fatty liver. At the same time, the findings show possible approaches for future therapy developments.

Fatty liver is a lifestyle disease that affects large proportions of the population, with diet and lifestyle being major factors. In the course of the disease, inflammation can be added to the fat deposits in the liver. The body reacts by trying to repair the cells, which can lead to scarring and hardening of the liver, a condition known as fibrosis. If this disease causes severe, chronic damage that impairs the function of the organ, it is eventually called cirrhosis of the liver.

It is a trite statement to say that the excessive consumption of alcohol can affect the liver. But for a long time, comparatively little research was done on this particular aspect. “Until some time ago, the focus was mainly on non-alcoholic fatty liver disease. It is only in the last five to ten years that alcohol-related damage to the organ has been getting more attention,” explains Tim Hendrikx from the Department of Laboratory Medicine at the Medical University of Vienna. The Belgian-born researcher has taken a closer look at one of the still unexplored aspects of the liver connected to the influence of alcohol. During his Erwin Schrödinger Fellowship at the University of California in San Diego, he was able to demonstrate how certain regulatory mechanisms in the digestive tract influence alcohol-related damage to the liver – and what treatments could be helpful in the future.

The gut as the key to alcohol-related liver disease

There are, of course, extensive overlaps in the course of alcohol-related and non-alcoholic fatty liver disease – as for instance the oxidative stress or the chronic inflammations developing in the liver. But there are also major structural differences, as Hendrikx clarifies. “The microorganisms present in the digestive tract are strongly affected by alcohol consumption. It is known that this composition of the gut microbiome has a particularly large influence on the development of the disease.”

Alcohol is ultimately responsible for allowing pathogens to move from the intestines into the bloodstream and to the liver, where they do their damage. “Excessive alcohol consumption causes the epithelial cells, which represent a first line of defense against pathogens in the digestive tract, to loosen their connection. This epithelial layer thus becomes fragile, allowing pathogens to penetrate the intestinal wall,” Hendrikx explains. “This interaction is much more pronounced in alcohol-related liver disease.”

In their research, Hendrikx and his colleagues focused on a very specific defence mechanism in the intestine: it is known that the messenger substance interleukin-22 (IL-22) is responsible for the production of certain proteins that are relevant for the immune defence in the gut. The intestinal level of these proteins – which belong to the family of the so-called lectins – decreases drastically when alcohol is consumed.

For his first step, Hendrikx used a mouse model for alcohol-induced liver disease – the animals are served a daily “cocktail” containing a certain amount of alcohol. With the help of this model he was able to confirm that the level of IL-22 production in the intestine also decreases with alcohol consumption. The next step was particularly innovative: “We genetically modified a bacterium so that it could produce IL-22. When we fed it to the mice, there was more IL-22 in their gut the next day,” Hendrikx says. “We were one of the first research groups to take this approach in a mouse model.”

The experiment was a success: examinations revealed that the secretion of the bacteria also improved the defence mechanisms. Fewer pathogens passed from the digestive tract to the liver, where fewer cases of alcohol-related disease occurred. But then, Hendrikx and his team went one step further. The researchers examined more closely a specific metabolite called indole-3-acetic acid (IAA), which is known to stimulate the production of IL-22.

IAA is a product of the degradation of so-called indoles, which can be supplied to the body through eating broccoli and other green vegetables, for example. Again, the familiar picture emerged: alcohol consumption reduced the occurrence of these metabolites in the body. “In the end, we were able to reveal a complete chain of mechanisms that contributed to the development of alcohol-related fatty liver disease – from the indoles via IAA and IL-22 to the lectins that prevent pathogens from reaching the liver,” Hendrikx explains in summing up the results.

Hendrikx sees two ways in which his findings could lead to new treatments that can protect against alcohol-related liver disease. One approach could be to isolate the metabolite IAA and produce it artificially in order to administer it as a drug. The second approach, on the other hand, involves a very long-term perspective. “In principle, we have proved that you can artificially create a bacterium to cure a disease,” Hendrikx notes. “So one could try to supply these bacteria to the human body in the form of a pre- or pro-biotic drink, for example.” But it will certainly take a long time for medical research to be ready to dispel all concerns about the use of genetically modified bacteria in the human body.