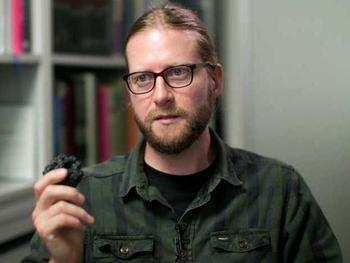 Tom Edwardson holds up a 3D-​printed model of his protein cage. The actual cages are three million times smaller.

Tom Edwardson modified a tiny artificial protein structure so it could be used as a vehicle for RNA molecules and other active substances. He now aims to create a spin-​off to bring his development to market.

It’s not always easy to get molecules of an active substance to where they need to be in the body and into the interior of cells while keeping them intact. This is because some of these molecules decay quickly, and many of them – including RNA molecules – are not readily taken up by the cells. If they are to be used as active substances, they need a delivery system. In the mRNA-​based COVID vaccines, for example, the RNA is packaged in a lipid nanoparticle. One disadvantage to this is that the lipid nanoparticles are not stable for long at ambient temperature.

Over the past few years, Tom Edwardson, a senior scientist in the Department of Chemistry and Applied Biosciences at ETH Zurich, has developed a unique protective shell in which RNA molecules can be very easily packaged and protected. It is a nanoscale cage composed of 24 identical proteins. Because of its small size, this cage cannot take up a whole mRNA molecule like the lipid nanoparticles used in the current COVID vaccines. Rather, Edwardson’s protein cage accommodates smaller RNA molecules – known as small interfering RNA – which allow systematic inhibition of individual genes in cells.

Edwardson moved to Switzerland six years ago. After completing his studies in chemistry, the Scotsman first travelled through Asia, worked as an English teacher in Korea for a while, then finally obtained his doctorate in Montreal. His subsequent move to Zurich for a postdoc was not solely based on ETH Professor Donald Hilvert and the university itself, but also because of the Alps and the abundant opportunities for climbing there. Climbing is one of his great passions. He can be found on the rock nearly every weekend, either in the Alps or in the Jura Mountains.

His other hobby is beer brewing. “I started that in Canada, together with a friend who is also a chemist,” Edwardson explains. “Beer brewing is the perfect hobby for chemists – it’s nothing but process chemistry,” he says with his usual laugh. Now he is not only the purveyor of beer to his research group, but he also participates in brewing competitions and introduces younger colleagues to his hobby.

He is just as passionate about his work, the protein cages, which are very easy to produce in bacteria using biotechnology. “Groups of 24 individual proteins organise themselves into cubes. It was mind-​blowing the first time I saw it,” Edwardson says. And while other protective molecule shells, such as lipid nanoparticles, turn out to be different sizes when they are manufactured, the protein cages are all exactly the same shape and size. “This is ideal, as size influences the properties of drugs – for example, whether cells absorb them and how well they do so,” the chemist explains.

Another advantage of the protein cages over other options for protecting small active substance molecules is that they can easily be stored at ambient temperature for months – no refrigeration required. Finally, the cube-​shaped cages have a small opening on every side, making it very easy to load the molecular “goods” for transport: the protein cages can be manufactured in large quantities and subsequently filled with the desired cargo. “They could even be filled with patient-​specific RNA drugs,” Edwardson points out.

To develop the protein shells, Edwardson used an existing synthetic protein structure that other scientists had developed, and changed the component sequence of the proteins at multiple key positions. The goal was to end up with numerous positively charged atoms in the interior of the cage. RNA molecules have a negative charge, meaning that they are automatically pulled in through the openings in the protein cage by electrical attraction. “Our cages are a typical example of protein engineering. Today we are able to specifically modify proteins to create new molecular objects,” Edwardson says.

He has since further enhanced the protein cage, lining the interior with a layer of surfactant. This enables water-​insoluble molecules, such as anti-​cancer therapeutics, to also be transported into the interior. In future he hopes to modify the cages’ exterior in specific ways, making it possible to control which somatic cells the protein cages enter. ETH Zurich has filed two patents on Edwardson’s protein cages. He and his colleagues are now planning to create a spin-​off to develop the cages further and get them ready to go to market. “The environment in Switzerland is ideal for founding a company,” he says. He would like to stay here anyway – also to be close to the good climbing opportunities.

In addition, he teaches his younger colleagues in the research group how important it is to do something else besides work. And that people should travel while they are young, and that there is no harm at all in taking a break between a degree programme and a doctoral programme to work. “I don’t regret working as a teacher at all, as I learned a lot there that still benefits me today.”