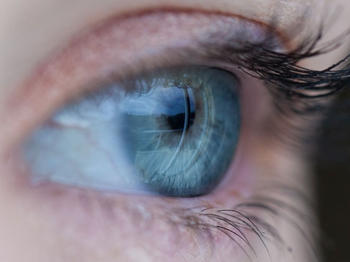 In cataracts, the lens of the eye, which is actually clear, becomes cloudy (symbolic image).

Cataracts are the most common eye ailment in humans. However, the exact processes leading to this condition are not fully understood. A team of researchers headed by the Technical University of Munich (TUM) has now discovered that the composition of the protein solution plays a decisive role. Their conclusions are contrary to prevailing opinion in the field.

The cells in the lens consist of a highly concentrated protein solution that is normally clear. “When the balance of the proteins in the lens is destroyed, they clump together and the lens becomes cloudy,” says Prof. Johannes Buchner of the Chair of Biotechnology at TUM. This results in the condition known as cataracts.

The clouding can have different causes. Because the proteins in the lens are formed in the embryo and are not replaced, damage can accumulate over the years, ultimately causing the lens to cloud over. That is why cataracts occur mainly in older people. But some individuals have a genetic predisposition to the eye condition, in which proteins in the lens mutate. In these cases, cataracts are present at birth or appear during childhood.

The scientists studied strains of mice affected by hereditary cataracts. They worked with the research group surrounding Jochen Graw, an expert in eye lenses who until 2019 was a professor at the Institute of Development Genetics at Helmholtz Zentrum München.

Until now, the prevailing view said that only the defective proteins in the eye were reacting with one another and forming clumps. But Buchner’s team has now shown that, in the mice with “genetic cataracts”, this was not the case. “We discovered that the mutated, unstable proteins in the lens were not there,” says Buchner. “They are eliminated immediately.” Instead the ‘healthy’ proteins clump together. “Our model, based on these new insights, says that the balance between the various proteins, or their ratios to one another, is important. When one of these components is missing, the remaining ones interact and form clumps.”

Many studies have been carried out to understand the causes of cataracts. “But never before has there been such a comprehensive investigation of the lenses in mice, comparing wild populations and mutants,” says Buchner. The new insights are an important step in the search for new treatment methods for cataracts. The most common method is surgery, in which artificial lenses are implanted in the eye.

“If you understand exactly what is happening, you can also think about ways that might use medication to disrupt the bad interactions,” says Buchner. “But we have a long way to go – and first we need to show that the proposed model also applies to the lens in the human eye.”