More Education May not Protect Against Dementia 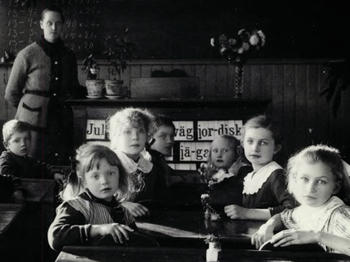 Classroom in a village in northern Sweden in the 1920s

The state of knowledge seemed clear: school education protects against dementia. Every school year is supposed to reduce the risk of developing dementia in later life by up to seven percent. Researchers at the University of Duisburg-Essen (UDE) have shown quite some perseverance and have now refuted this causal connection. Their work is based on a school reform that extended schooling in Sweden 80 years ago. The American Journal of Epidemiology covers this in its current issue.*

Education was considered a promising factor that could actively reduce the risk of dementia. And indeed there is a correlation: Alzheimer's and similar diseases affect people with a low level of education more often than university graduates. But is it really education itself that has the protective effect?

Not necessarily, according to the research group led by UDE’s Professor Martin Karlsson. For years he and his colleagues combed through archives for information on the reform of the Swedish elementary school between 1930 and 1950, when compulsory education was gradually extended from six to seven years nationwide. "This is exactly the point," explains Karlsson. "It was mandatory for all 13-year-olds, regardless of intelligence, character, social environment or other factors that normally affect the decision on how long to go to school." The researchers compared the different educational lengths with dementia diagnoses of 1.3 million people born between 1920 and 1936.

More education but not more money

A parallel study on job market success showed that the extended education did not have a significant influence on labour market outcomes later in life: Career choice and income did not change on average after the reform, so the opportunities to lead a healthy lifestyle did not change either.

This means that the economists, epidemiologists and psychologists involved can be confident in actually having examined nothing but the influence of the additional school year.

Karlsson explains how it’s possible that although there is a correlation between the two outcomes, there is no causality: "Important factors determining success at school – for example intelligence or socio-economic background – also affect our aging process."