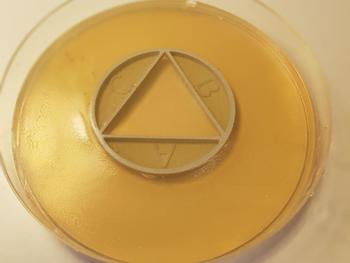 With the modified agar plate CombiANT it is possible to do high-speed tests in order to see how bacteria react to different combinations of antibiotics.

Researchers at Uppsala University have developed a new method to determine - rapidly, easily and cheaply - how effective two antibiotics combined can be in stopping bacterial growth. The new method is simple for laboratories to use and can provide greater scope for customising treatment of bacterial infections.

Combinations of antimicrobial agents are invariably prescribed for certain infectious diseases, such as tuberculosis, HIV and malaria. Bacterial infections that are not readily treatable, such as those affecting cardiac valves and prostheses, and lung infections in cystic fibrosis, are also usually subjected to a combination of antibiotics. The effect sought, "synergism", means that the joint action of the combined agents is more effective than could in fact have been expected, based on the efficacy of the separate agents. In contrast, the opposite phenomenon - that is, two antibiotics counteracting each other's effects ("antagonism") - is undesirable. However, knowing what the combined effect will be is not always easy.

With the newly developed method known as CombiANT (combinations of antibiotics), interactions between various antibiotics can be tested on agar plates and results obtained in 24 hours. The lead author of the study, Nikos Fatsis-Kavalopoulos, developed the method at Uppsala University. It is based on creating a "concentration gradient" of antibiotics that have been cast into an agar plate, using a 3D-printed plastic disc.

On the agar plate, bacteria that have been isolated from an individual patient are then cultured to see how they react to different combinations of antibiotics.

In their study, the researchers investigated E. coli bacteria isolated from urinary tract infections. Different cultures of E. coli proved not to react in the same way to specific antibiotic combinations. A combination of antibiotics that had synergistic effects on most cultures brought about antagonism in some, with the result that the treatment for the latter group was inferior.

"This result may be of great clinical importance. Consequently, instead of assuming that synergistic and antagonistic interactions are equal for all bacterial isolates, we test individually every isolate taken from an infected patient," says Dan I. Andersson, Professor of Medical Bacteriology at Uppsala University, who is primarily responsible for the study.

Customising the drug combo in this way may be crucially important in achieving high efficacy in the treatment of infections. Being a simple, low-cost method, it is also easy to introduce and use in health care.