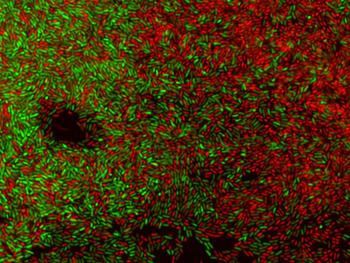 Biofilms are potential sources of contamination in the food industry. A recent study by the FFoQSI Competence Center at the Vetmeduni Vienna investigated where they hide and what bacteria can be found in them. Biofilms can cause additional costs in production and are a source of danger to consumer health.

Biofilms are responsible for a number of problems in food production, such as reducing the efficiency of heat exchangers and corrosion of plant components. Biofilms may also include spoilage agents and food-associated pathogens such as listeria, EHEC and salmonella. If food comes into contact with these biofilms, contamination may occur. As a result, shelf life can be drastically reduced and, in the case of pathogens, consumers may become ill by eating contaminated food.

In order to prevent negative consequences from biofilms, it is important to know where biofilms form and which microorganisms are hiding in them. Researchers at the Unit of Food Microbiology at Vetmeduni Vienna therefore investigated biofilms at an Austrian meat processing environment within the framework of the Competence Center for Feed and Food Quality, Safety and Innovation (FFoQSI).  The researchers examined 108 different sites – 47 of which were food contact surfaces and 61 surfaces that are not directly in contact with food – for the presence of biofilms.

Researchers identified a number of hotspots for biofilms

A total of ten biofilm hotspots were identified, five of them on food contact surfaces such as cutting machines and accessories. Seven of the biofilm-positive samples were taken during work and three after cleaning and disinfection, including one at a conveyor screw. But biofilms are also lurking in other places, says  Eva M. Wagner: "We discovered further biofilms in drains and water hoses – places that are not cleaned by default, but are a potential source of contamination. Water hoses are often used to remove cleaning agents from from disinfectant residues. If a biofilm is now in the water hose, freshly cleaned areas, including food contact surfaces, can be contaminated again." A further study focusing  on biofilms in water hoses is now intended to shed light on how common they are and how they can be effectively removed.

The researchers also isolated bacteria from the biofilm-positive samples and characterized them. In total, a wide range of bacteria from 29 different genera (types) were found. Kathrin Kober-Rychli said: "From all biofilms, bacteria of at least four and a maximum of twelve different genera were isolated. This clearly shows that these are multi-species biofilms, so different bacteria colonize the same biofilm. Most often we were able to assign the biofilm bacteria of the genera Brochothrix, Pseudomonas and Psychrobacter." Brochothrix and Psychrobacter are well-known meat spoilers, pseudomonads are known for their good biofilm formation. Therefore, according to Kathrin Kober-Rychli, "further research is needed in the prevention, rapid detection and control of biofilms in the food sector. Until then, regular and thorough mechanical cleaning is and will remain the most important measure in the prevention of biofilms."

The Competence Center for Feed and Food Quality, Safety and Innovation (FFoQSI) investigates various issues in the feed and food industry. One of the research focuses on biofilms, which is being processed at Vetmed Vienna, among others. Biofilm is a life form of microorganisms (bacteria, fungi, archaea and solitary organisms) that cling to a surface in a very narrow space and form a protective layer, the so-called matrix. This matrix, which consists of carbohydrates, proteins and extracellular DNA, protects the "inhabitants" of the biofilm from external influences such as disinfectants, UV radiation and dehydration. There are many examples of biofilms in the food industry. In milk processing and vinegar production, biofilms are used to achieve a certain effect, so they are useful. However, food processing also offers ideal conditions for unwanted biofilm formation.