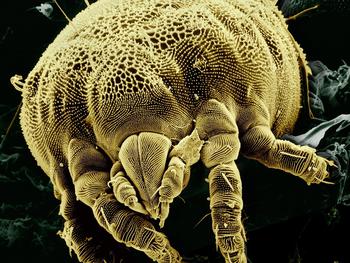 A research team at MedUni Vienna, working in cooperation with the Johns Hopkins University in Baltimore, has discovered how certain dust mite allergens activate a well-known inflammatory factor – serum amyloid A protein –and can thus “trim” the lung tissue “in the direction of allergy”. The scientists led by Ursula Smole and Winfried F. Pickl from MedUni Vienna's Institute of Immunology have discovered that the protein serum amyloid A1 (SAA1) is released by lung epithelial cells in a less active, bundled form and remains inactive until a binding partner (usually certain bacteria) breaks this bundle down into its subunits. This gives rise to an active, inflammatory form of SAA1, which normally fights bacteria.

However, Smole and colleagues have now demonstrated that, in the absence of bacteria, the SAA1 subunit also binds to specific receptors (FPR2, formyl peptide receptor 2) of the bronchial epithelium, leading to the release of the alarmin interleukin-33 (IL-33). "The released alarmin IL-33 can then bind to immune cells located underneath the pulmonary epithelium, which results in the massive production of allergy-promoting factors," explains Pickl.

It has long been suspected that allergens can also switch on innate immune mechanisms, and thus make a significant contribution to the development of allergies. In the recent study, the MedUni scientists have now demonstrated, for the first time, the mechanism by which certain house dust mite allergens hi-jack the soluble pattern recognition receptors (SAA1) of the immune system, similar to bacterial infection and if there is equivalent contact, and break them down into their subunits, which subsequently releases the alarmin IL-33, which triggers inflammation.

In order to provide the exact proof, the research group also used a so-called SAA1/2 knock-out model. These are animals that cannot produce SAA themselves and are therefore well protected from the "attack" by mite allergens. "This enabled us to identify a further mechanism by which dust mite allergens attack the human immune system," said Pickl. This opens up new possibilities for treating allergies in humans in the future. It is conceivable that local neutralisation (in the lung) of active, inflammatory SAA1 or blockade of the FPR2 receptor could alleviate the effect of mite antigens on the innate immune system.

Ursula Smole, the first author of the paper, completed her PhD studies as a member of the "Vienna Allergy School" within the Special Research Program (SFB-F46) 'Towards prevention and therapy of allergy' (www.allergy-research-program.at) and carried out the present work, inter alia, as coordinator of the FWF-funded Doctoral Program (DK-W1248) 'Molecular, Cellular and Clinical Allergology, MCCA' (www.phd-mcca.at).