Washing machine bacteria: the smell comes from the rubber seal 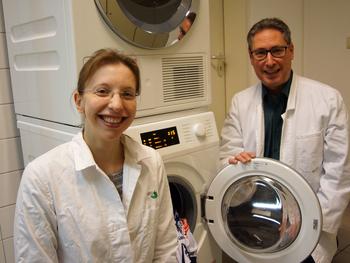 Almost every household in Germany has a washing machine. But what many owners don't realise is that washing machines, which are supposed to clean textiles, can actually be full of germs. Dampness, heat and a large variety of nutrients create ideal living conditions for the growth of bacteria. Current trends such as washing at low temperatures, water saving programmes and the use of bleach-free liquid detergents, support the growth of germs even further.

"Which bacteria are found in which part of the machine? And what are the factors involved? Those were our initial questions," explains the project leader, Prof. Dr. Markus Egert, who teaches Microbiology and Hygiene on the Schwenningen Campus of Furtwangen University. Although microorganisms in the washing machine can also present a health risk, especially for people with weak immune systems, in most households they simply cause an unpleasant odour in the machine itself and in the washing.

In the study, the make-up of the bacterial community of 50 samples from 13 household washing machines from the Villingen-Schwenningen and Waldshut-Tiengen areas were examined using molecular biological methods. Samples were taken from the dispensing drawer, the rubber seal round the window, the sump tank and from textile fibres from a test wash in each machine. The users of the machines were also questioned on their washing habits.

In 13 machines, 229 different types of bacteria were identified. Between 30% and 60% of the 10 most commonly found types in each sample area were considered a potential health risk. Each sample area contained its own, typical community. Water bacteria were generally the most commonly found, and on the textile fibres, typical skin bacteria. The dispensing drawer contained the largest variety of bacteria.

The bacteria which generally cause the bad smell, moraxella osloensis, was found in 9 of 13 washing machine seals. And at 12.5%, this had the highest relative frequency. "Moraxella osloensis is extremely tough and obviously can survive well in the highly variable environmental conditions of the window seal. To avoid odours in the washing and the washing machine, the seal should be cleaned regularly and the door left open to dry," advises Egert.

Only in one area of user behaviour was there a significant link with the washing machine bacteria. A higher number of hot wash cycles per month led to a greater variety of bacteria in the dispensing drawer. "Washing at 60°C and hotter is still the best thing for washing hygiene. However the heat radiated to other parts of the machine may perhaps encourage the growth of germs there. Here further studies are necessary. I'm sure the washing machine still has plenty of microbiological surprises for us, " says Egert.