A new approach to treating overweight and obesity 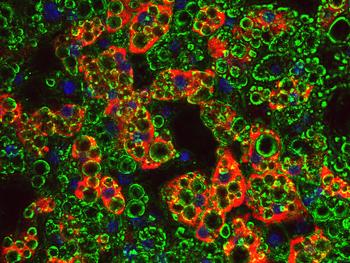 Microscopic image of fat cells (green). In blue staining you can see the cell nucleus. Red is the so-called UCP1, a transmembrane protein that can generate heat without muscle activity such as trembling.

1.9 billion people in the world are overweight. Of these, 650 million people are obese, which increases the risk of secondary diseases such as high blood pressure or cancer. Professor Martin Klingenspor and his team at the Technical University of Munich (TUM) examine how our fat metabolism affects our body weight and overall health. In cooperation with professor Bart Deplancke’s systems biology group from the École Polytechnique Fédérale de Lausanne (EPFL), the team has now uncovered an entire network of genes that could turn energy storing fat into beneficial calorie burning fat.

Our fat cells, technically referred to as adipocytes, play an essential role in regulating energy balance in our body. “Adipocytes are not merely an energy storage for times of deprivation, but they also release hormones into the blood, regulating our metabolism as well as feelings of hunger and satiety through the brain and other organs. Nevertheless, too much of a good thing causes harm.” explained Professor Klingenspor, Chair of Molecular Nutritional Science at the TUM Else Kröner-Fresenius Center.

White, beige or brown – the color of fat cells affects our health

There are different types of fat tissue in our body, which can be categorized according to color. White fat cells are primarily responsible for energy storage. Brown and beige fat cells can convert nutritional energy into heat. This process is referred to as non-shivering thermogenesis – a principle that small mammals and human newborns use to maintain a stable body temperature.

The occurrence and activity of brown and beige fat cells vary among individuals. There is some evidence suggesting that people with a high number of thermogenic fat cells possess a lower risk to develop obesity and associated metabolic disorders. Especially the growth of beige fat cells within white fat tissue may have particular health benefits.

“We want to understand how thermogenic fat cells develop; so how beige fat cells grow inside white fat tissue,” stated Klingenspor. By “browning” the white fat tissue, an energy-storing organ could be partially transformed into an energy-dissipating organ, thereby improving metabolic health.

The development of beige fat cells is controlled by a still largely unknown genetic program. Mouse strains with divergent genetic backgrounds largely differ in their ability to brown the white fat tissue. “By systematically comparing fat cells among these different strains of mice, we were able to discover which genes or regulators might explain the variation in beige cell differentiation – in other words, the growth of beige fat cells”, indicated Klingenspor.

New possibilities due to transcriptomics and network analyses

By sequencing all transcripts of a cell using Next Generation Sequencing technology, all gene activities across the entire genome can be registered in a snap-shot.

For the current study, the joint TUM/EPFL team performed a comparative analysis of the transcriptomics of fat cells from genetically divergent mouse strains. The study goes beyond other work in this field in that it not only identifies important individual factors but also relates them to each other in a molecular network.

With this approach, the team could provide a systematic overview over the network of cell-intrinsic regulatory mechanisms that represent the underlying principle for the development of beige fat cells, making them the first team of scientists to achieve this.

“Now we have gathered a unique insight into the genetic architecture driving the molecular mechanisms of beige fat cell development. What we managed to confirm in a cell culture is now to be examined ‘in vivo’ – so inside a living organism – as our next step,” said Klingenspor with respect to avenues for future research.