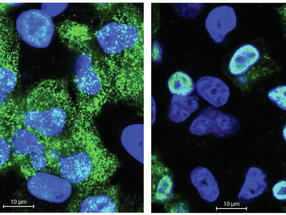 Normally, bird flu viruses do not spread easily from person to person. But if this does happen, it could trigger a pandemic. Researchers from the MDC and RKI have now explained in the journal Nature Communications what makes the leap from animals to humans less likely.

Whenever people suddenly become infected with a bird flu virus such as H5N1, H7N9, and H5N6, the World Health Organization (WHO) has to assess the risk: Are these the first signs of a pandemic? Or is it just a few dozen or hundred cases that have only arisen through close contact with infected poultry? Researchers led by Professor Matthias Selbach from the Max Delbrück Center for Molecular Medicine have now found another piece of the puzzle that may be important in this initial assessment. In a paper published in Nature Communications, the researchers explain that avian influenza A viruses (IAVs) are unable to transform infected human cells into effective virus factories, because they do not produce enough of the matrix protein M1 following infection. The virus requires this protein, however, to export its many copies of its genetic material from the cell nucleus – a prerequisite for building new viruses.

Not all flu is the same – the name refers to a large family of viruses. Each member of this family is named after two prickly growths on the virus’s surface: hemagglutinin (H), which enables the virus to infect human and animal cells where it can multiply, and neuraminidase (N), which helps the virus’s offspring to extract themselves from the infected cell. In waterfowl, there are 16 known hemagglutinin subtypes and nine known neuraminidase subtypes. That results in at least 144 possible combinations that are constantly changing and adapting to new hosts – like chickens, for example, but also mammals including horses, pigs, and humans.

Such new virus variants are often more dangerous than seasonal flu, because the human immune system has never encountered them before. Some people find themselves defenseless, while the immune system of others reacts so violently that the person’s own resistance damages the body. In the worst case scenario, a pandemic could cost millions of lives. The Spanish flu of 1918, for example, claimed more than 50 million victims. Researchers around the world are therefore trying to understand the rules that determine when there is the possibility of a pandemic, and when there is not.

Why are human cells bad virus factories for bird flu?

“Hemagglutinin in humans and birds has a slightly different chemical structure, for example, which makes it more difficult for an avian influenza virus to infiltrate a human cell than a bird’s cell,” explains Selbach. Boris Bogdanow, a PhD student in Selbach’s research group and the lead author of the current study, focused his research specifically on what other natural species barriers exist in flu viruses.

Matthias Selbach’s group analyses proteins using quantitative mass spectrometry. In collaboration with the Robert Koch Institute (RKI), Boris Bogdanow and his colleagues infected human pulmonary epithelial cells separately with a bird flu virus and a human flu virus. They then measured the quantity of all newly produced proteins in the mass spectrometer. Postdoctoral researcher Dr. Katrin Eichelbaum had also developed a method that enables the precise differentiation of new and old proteins. “In the first analysis, we did not find any major differences between the two strains,” reports Boris Bogdanow. “At first glance, the avian flu virus and the human virus displayed little difference with regard to protein production, which was quite surprising.”

But the devil is in the detail, so Bogdanow performed more in-depth analyses to take a closer look at the protein distribution. In doing so, he came across the matrix protein M1, much larger quantities of which were produced in the lung cells infected with the human virus. The M1 protein is responsible, among other things, for exporting the replicated viral RNA from the nucleus of the infected cells and then assembling it with other newly produced viral proteins to form flu virus offspring. Could it be, therefore, that the viral RNA of bird flu viruses in human cells remains trapped in the cell nucleus because too little M1 protein is present?

Another piece of the puzzle

Fluorescence microscopic investigations confirmed these suspicions. The genetic material of the bird flu virus was far less capable of breaking out of the cell nucleus than the RNA of the human flu virus. But why? With the help of the MDC’s sequencing platform and Professor Irmtraud Meyer, they discovered a small segment in the viral RNA of the avian flu virus that affects alternative splicing. “We call this a cis-regulatory element,” says Bogdanow. “Alternative splicing regulates which proteins are ultimately made from a single gene, because many genes code for more than one protein. When human cells are attacked by bird flu, this element ensures that more M2 rather than M1 protein is produced.”

In order to assess the relevance of this result, Professor Thorsten Wolff and his research team from the Robert Koch Institute transferred the cis-regulatory element from the bird virus to the human virus. This did indeed result in the human flu virus replicating less effectively in human lung cells. Selbach’s team even conducted a similar experiment with Spanish flu viruses, whose genetic material was isolated in the nineties from graves in the permafrost soil of Alaska. However, they only used a small part of the viral RNA and not the entire virus for the experiment. Nevertheless, they were also able to confirm their theory on the cis-regulatory element for this virus.

“How pathogenic an avian flu virus is and whether or not it has pandemic potential depends, of course, on many factors,” says Selbach. “A study on cell cultures cannot cover all these factors. Nevertheless, it might be useful in future to include an analysis of this RNA segment in the risk assessment of avian influenza viruses.”