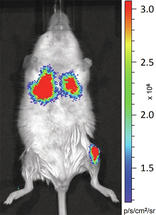 Transplantation of hematopoietic stem cells in mice: the tibia as a injection site and the subsequent concentration of transmitted cells in the lung.

Contrary to previous study results, a research group led by Thomas Rülicke, head of the Institute of Laboratory Animal Science at Vetmeduni Vienna, who also conducts research at the Ludwig Boltzmann Institute for Hematology and Oncology of the Medical University of Vienna, has shown that even the previously recommended low injection volumes are clearly too high for the transplantation of stem cells in mice. Rülicke: “Our experiments have shown that even with an injection volume of 10 μl considerable amounts of the injected cells leak from the bone marrow cavity into the bloodstream and can be detected in the lung of the animals.”

A systematic study of several mouse strains with different body sizes revealed that the injection volume and not the absolute number of transferred cells is the critical factor determining the release of injected cells from the medullary cavity. “In order to stress the animals as little as possible while saving valuable stem cells, we recommend a maximum injection volume of 3 μl for intra-bone marrow transplantation in laboratory mouse with the highest possible cell concentration,” says Rülicke.

The new recommended injection volume is also important because the experimental transplantation of hematopoietic stem cells in laboratory mice is mostly performed by intravenous injection into the tail vein. To take up residence in the bone marrow, a process referred to as “homing”, the cells must first pass through the lung before they enter the systemic circulation. The great majority of the transplanted cells is retained in the lung and other organs, so that only a small number actually reach their destination.

The new gold standard: less than 3 millionths of a litre

Transplanting the cells directly into the bone marrow helps to avoid this loss. This method is not easy to perform in mice, however, and can only be carried out with a very low injection volume. The advantages of a direct transfer into the medullary cavity of the upper and lower leg bones in mice have been repeatedly demonstrated in the literature. The injection volumes used vary enormously between 10 to 40 μl. These are very small amounts. After all, μl stands for microlitres, which is one thousandth of a millilitre or one millionth of a litre.