Intestinal bacteria could influence the development of multiple sclerosis 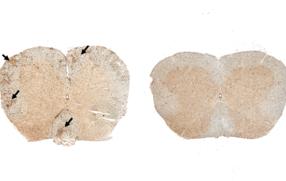 A tryptophan-free diet in mice changes the composition of the intestinal bacteria and protects against symptoms of experimentally generated multiple sclerosis.

Tryptophan is an essential amino acid, i.e. a protein component which cannot be produced by the body itself, but must be obtained from the diet. Metabolic products of tryptophan serve as chemical messengers for numerous important bodily functions. They control specific immune cells, for example, or help to strengthen the intestinal barrier. A diet which specifically omits tryptophan alters the composition of the intestinal bacteria in mice, and surprisingly results in the animals not developing symptoms of multiple sclerosis (MS). This has been demonstrated by scientists from the Cluster of Excellence "Precision Medicine in Chronic Inflammation" at the Institute of Clinical Molecular Biology (IKMB) at Kiel University (CAU), in cooperation with the German Cancer Research Center (Deutsches Krebsforschungszentrum, DKFZ) in Heidelberg.

Multiple sclerosis (MS) is a chronic inflammatory neurodegenerative disease of the central nervous system. With MS, the own immune system attacks the insulation of nerve fibers in the central nervous system, and gradually destroys them. This disturbs the transmission of signals in the nerves. Over time, these changes can disrupt the motor functions or sensory perception of those affected. Previous studies suggested that a combination of genetic predisposition and environmental factors causes the disease.

The research by Dr. Maren Falk-Paulsen and Professor Philip Rosenstiel from the Institute of Clinical Molecular Biology (IKMB) at Kiel University (CAU), in cooperation with a team led by Professor Michael Platten from the DKFZ in Heidelberg, shows that the intestinal microbiome, i.e. the totality of the bacteria in the gut, could also play an important role. They used a mouse model of multiple sclerosis, in which the body's own immune cells attack a specific envelope protein of the nerve insulation in the central nervous system, and thereby cause typical MSsymptoms. However, mice that received a special diet in which the amino acid tryptophan was missing, did not develop any MS symptoms in this model. In these mice, the aggressive immune cells did not enter the spinal cord. This protective effect was dependent on the presence of certain bacteria in the gut - if these were missing, then the protection against MS also disappeared.

"By omitting the amino acid tryptophan, the composition of the intestinal bacteria changes, which sends a so far unknown signal to the immune cells. We do not yet know which mechanisms are behind this phenomenon. We want to examine this more closely in future," said Dr. Maren Falk-Paulsen, researcher at the IKMB and member of the Cluster of Excellence PMI.

Scientists from the Cluster of Excellence PMI at the IKMB led by Professor Philip Rosenstiel have already been researching how tryptophan influences the intestinal microbiome and chronic inflammation for a long time. "In previous work, we have been able to show how tryptophan affects inflammations in the gut," explained Professor Rosenstiel, director at the IKMB and board member of the Cluster of Excellence PMI. "Now we have shown that the omission of tryptophan also affects inflammatory reactions in other parts of the body, and this via a mechanism independent of the previously known signaling pathways. Based on our results, we hope to find a new target for treating MS in future," added Rosenstiel.