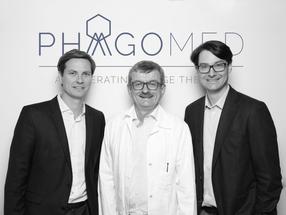 Austrian biotech company PhagoMed Biopharma GmbH (PhagoMed) successfully completed another financing round. PhagoMed, located at the Vienna Biocenter, is focused on developing virus-(phage-) based therapies against drug-resistant and chronic bacterial infections. Investors provided further €1.5 million in equity investments to support this novel approach to tackle the antibiotics crisis. The additional funding will be used to accelerate three in-house development programs.

PhagoMed works on solutions for the global antibiotics crisis – the increasing rate of multi-drug resistances against the historically so effective antibiotics. The company develops pharmaceuticals based on natural viruses, called phages, that can infect and destroy bacteria. Phages and phage-based pharmaceuticals therefore have the potential to become a highly effective alternative to antibiotics for the treatment of multi-drug resistant infections. Indeed, PhagoMed’s co-founders have successfully treated individual patients with phages in Germany – as a last resort when antibiotics had failed.

Already in 2018 PhagoMed successfully raised more than €4 million in public grants and private investments and set-up its research programs at the Vienna Biocenter. The company today announced further investments from existing and new investors totaling €1.5 million.

„Our research activities over the past year led to the identification of a series of drug candidates, the first of which are now being validated in animal trials. These results convinced both our existing and new investors to support our R&D activities with further equity investments.” says Alexander Belcredi, Co-Founder and Co-CEO of PhagoMed. „These additional seed investments will allow us to further increase the research team in Vienna and to selectively invest into our infrastructure.”

One specific field of focus for the company is the treatment of infected artificial joints, such as hip prostheses. These widespread infections are difficult to treat since they are often caused by multi-drug resistant bacteria. In addition, these bacteria typically form a biofilm on the surface of the prosthesis, which further reduces the effectiveness of antibiotics. In these types of complex infections phages are especially promising as a treatment alternative since they can degrade the bacterial biofilms as well as kill the multi-drug resistant bacteria. One of the potent drug candidates identified by PhagoMed is specifically aimed at these infections and is now being validated in animal trials. PhagoMed plans to start a first clinical trial in this indication by 2021.