Principles of limb regeneration in salamanders show link to mammals 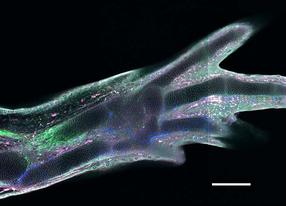 A regenerated limb in a transgenic axolotl, in which different cell types express different fluorescent proteins 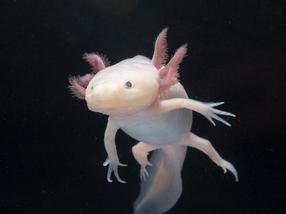 Scientists have long argued over which cells enable salamanders to grow back lost limbs. By tracking lineages and characterising individual cells, researchers could now show that connective tissue cells develop stem-cell-like properties and underlie the regeneration of legs.

Among all four-legged animals, the ability of salamanders to replace lost limbs even as adult animals is unique. This has made some species of salamander, such as the Mexican axolotl (Ambystoma mexicanum), popular model organisms for studying regeneration. If an axolotl loses a limb, then cells from near the stump accumulate and form a tissue called blastema. The blastema can grow back a fully functional limb composed of many different tissues and cell types, such as muscles, neurons or connective tissue. Until now, it was unclear how mature tissue can produce blastema cells. A study took a closer look at connective tissue cells to shed light on this issue.

There were two possible models leading to the formation of a blastema: either stem cells sit dormant within the connective tissue and wait for when they are needed; or mature connective tissue cells respond to the loss of a limb by “de-differentiating” into limb progenitor cells similar to those in an embryo. So far, isolating a blastema precursor cell and tracking the fate of its lineage in an adult axolotl was not possible due to the variety of tissues that exist in a limb. An international team of scientists in Vienna, Leipzig and Dresden have now overcome this hurdle.

The scientists created strains of genetically marked axolotls that expressed molecular labels associated with connective tissue cells. They also applied single-cell RNA sequencing to analyse the activity of different genes in specific cells. Combined, the two approaches allowed them to track origin and fate of blastema-precursors and characterise their molecular profiles through the course of limb regeneration.

A particular challenge was posed by the creation of the transgenic axolotl lines that molecularly labels individual tissue types. Transgenesis in axolotls is time consuming, as it takes a year until an axolotl embryo reaches adulthood and can reproduce. The experiments were carried out at the Research Institute of Molecular Pathology (IMP) in Vienna, the Max Planck Institute for Evolutionary Anthropology (MPI-EVA) in Leipzig, and the Center for Regenerative Therapies Dresden (CRTD).

The scientists showed that blastema progenitors originate from mature fibroblasts. If a limb is lost, then these mature cells “de-differentiate” into progenitor cells that are similar to the cells found in embryonic limb buds. The experiments could not find any indication for the presence of pre-existing progenitor cells, which some scientists had thought were the reason for the axolotl’s outstanding gift to regrow limbs and organs.

"When we tried to analyse the fate of cells in regenerating limbs, it used to be like making a fruit juice with a bowl of fruit without knowing what kinds of fruit are inside", says Prayag Murawala of the Research Institute of Molecular Pathology (IMP), one of the authors. "But now we can pick apples and make an apple-juice, or we can pick cherries and make cherry-juice from this mix-fruit bowl. Using this new level of resolution, we showed that there is no ‘magic cell’ that axolotls would have and that mammals would not have. Both rely on fibroblasts in case of an injury, but one can regrow organs, whereas the other forms fibrotic scars."

The findings are ground-breaking, not only because they settle a long-standing debate in developmental biology, but also because they have high relevance for understanding regeneration in mammals. There, too, fibroblasts respond to injuries by differentiating – they turn into myofibroblasts, which then form scars. What makes axolotl fibroblasts different, what empowers them to develop stem-cell properties and replace complex body parts? Finding the answer will be the next chapter in the scientific journey towards understanding regeneration.