Link found between genes in mosquitos and the spread of diseases 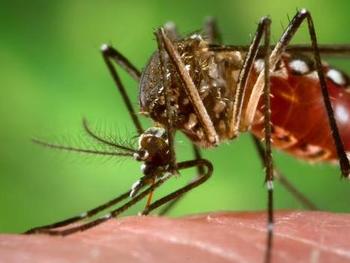 James Gathany - http://phil.cdc.gov/phil/home.asp - US Department of Health and Human Services

Researchers at the University of Missouri have found a link between genetic molecules in mosquitos and dengue fever. The results of the study, conducted by Susanta K. Behura and his colleagues, could lead to future breakthroughs in combating destructive tropical diseases like dengue fever, Zika virus and yellow fever. The researchers focused their efforts on a single species of mosquito, Aedes aegypti, a key player in the spread of such diseases in animals and humans around the world.

An estimated 2.5 billion people reside in places where it's possible to contract dengue fever, according to the Centers for Disease Control and Prevention. While small outbreaks have occurred in the continental U.S., dengue fever has been particularly severe in Puerto Rico, where a 2007 epidemic affected approximately 10,000 people. According to the World Health Organization, "Of all disease-transmitting insects, the mosquito is the greatest menace."

"Given the widespread global distribution of the Aedes aegypti mosquito, we estimate over 40 percent of the world's population is at risk from dengue," said Behura, assistant research professor in bioinformatics and computational biology in the Division of Animal Sciences. "Now that the study has been completed, the research could be used to precisely modify the genetic material of mosquitos, preventing them from spreading disease to humans."

Recent research has shown that fragments of transfer RNA (tRFs), small sections of RNA that can regulate gene expression, play a role in development of disease. This prompted Behura and his colleagues to collect samples from mosquitos around the world, which then underwent molecular analysis.

In analyzing tRF response to a variety of conditions and stimuli - including sex, developmental stage and exposure to the dengue virus - the team found that a specific tRF was expressed differently when exposed to each of these conditions. In particular, the sex-biased expression was important, as only female mosquitos feed on blood and spread diseases to humans. Researchers concluded that this particular tRF is a promising candidate for further study, raising the possibility of a targeted approach to halting the spread of dengue fever.

"We do not have vaccines for all the different viral diseases caused by this mosquito," Behura said. "Currently, the best way to fight these mosquitos is to control them, and the rational way to control human infections is to make them incapable of spreading the disease."