The Chemistry of Gin (And Tonic!) 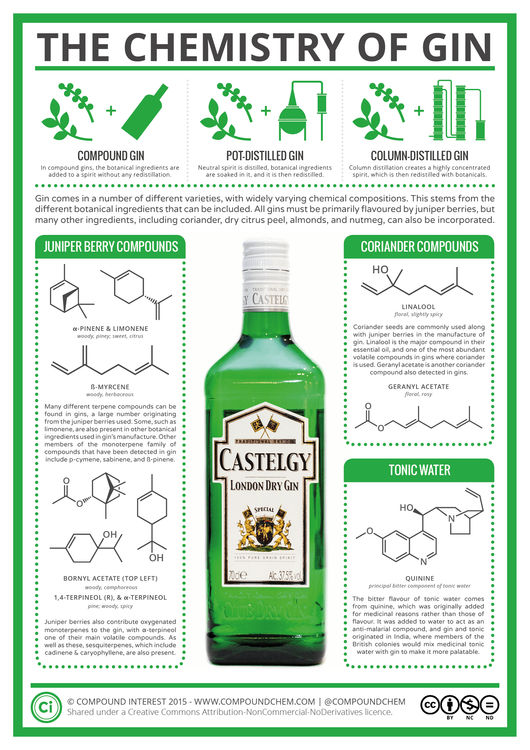 The Chemistry of Gin (And Tonic!)

For the fifth in the ‘Alcohol Chemistry’ series, we turn to gin. As with other types of alcohol, there are a huge number of different chemical compounds present, but it’s possible to identify a range of significant chemical contributors to its aroma & flavour. Here, we take a look at those compounds and where they come from.

Gin is a spirit that we’ve been making for centuries; although Franciscus Sylvius, a Dutch physician and scientist, is often credited with its discovery in the 17th century, references to gin (or genever as it was also known) exist as far back as the 13th century. Sylvius originally conceived it as an concoction for the treatment of kidney and bladder problems, but its popularity as a recreational drink later soared.

Its popularity in England was spurred by heavy government duties on imported spirits, as well as the fact that gin production was not required to be licensed. This growth in popularity was also accompanied by a gradual decline in its reputation, however, with it being blamed for a range of issues, from social problems such as public drunkenness, to increases in death rates. Gin’s reputation has since largely recovered, although some references to these associations still survive in English parlance – ‘Mother’s Ruin’ is still a widely known alternative name for the spirit.