Expanding the reach of therapeutic antibodies 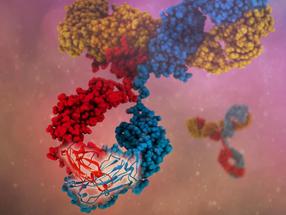 A group of researchers has developed an approach to efficiently produce antibodies that can bind to two different target molecules simultaneously, a long-desired innovation in the field of cancer immunotherapy.

Antibodies are proteins produced by the immune system that specialize in recognizing and binding to molecular targets unique to bacteria, viruses or other foreign cells. Because antibodies are stable and long-lasting in the human body and can precisely recognize specific targets, they have been exploited to develop new treatments for diseases. For example, modified antibodies can be used to bind to targets in cancer cells, recruiting the immune system to attack the cancer or preventing the cancer cells from multiplying. Because of their precision and capacity to stimulate the body's immune response, antibody-based therapies typically have fewer side effects than chemotherapy or radiation.

Antibodies are "Y" shaped, and typically bind a target, or antigen, through the tip of each arm of the "Y." In naturally produced antibodies, both arms of a single antibody typically are the same and bind to the same target. One approach to increasing the versatility of antibody therapies is to engineer what are called bispecific antibodies, in which each arm binds to a different molecule. This expands the range of what antibodies can be used for. For example, a bispecific antibody could target a cluster of proteins made up of multiple protein types, or it could bring two different molecules or cell types together.

In experiments published in JBC, a team overseen by John de Kruif, the chief technology officer of clinical-stage research company Merus N.V., engineered improved bispecific antibodies by making a few key changes to the structure of natural human immunoglobulin G (IgG) antibodies, and showed that they could be readily manufactured. IgG is a well-studied antibody and is the most abundant one produced in the human body.

"We have made, in a complete IgG molecule, only four changes to get from a normal monospecific antibody into bispecific antibody," de Kruif said. "The great thing is that it looks so much like a normal antibody that we can produce it well and we believe we know how it will behave."

The team's idea was to introduce amino acids with opposite charges to the two different heavy chains, so that identical heavy chains would repel each other whereas the positively and negatively charged heavy chains would attract. To identify the right locations in which to introduce these charges, they used computational simulations using virtual screening software followed by validation in the lab.

"Using the virtual screening software provided a baseline," said Linda Kaldenberg-Hendriks of Merus, who led the testing of the antibodies. "We identified potential good candidates for design choices in the heavy chain sets, then generated the proteins and characterized them thoroughly. When we saw that they were behaving the way we wanted them to, it was really satisfying."

"A strong point [of this study] was to combine different approaches, the computational tools with the biochemistry and structural biology," said Camilla De Nardis of Merus and Utrecht University, who was a co-lead author on the study.

The proteins that worked paired up to form bispecific antibodies, with very few to no monospecific antibodies in the mixture. The team next subjected them to a battery of tests, confirming that they were as stable as normal IgG antibodies and had similar pharmacokinetic properties.

Because production and purification of IgG antibodies is a well-established industrial process, the team could simply provide manufacturers with the protein sequences modified with the key changes that allowed the proteins to form bispecifics. "We believe we can make virtually any bispecific antibody we want," Kaldenberg-Hendriks said.

The team's bispecific antibodies targeting cancer cell growth factor complexes are now in clinical trials, with more still in the preclinical pipeline. The team is enthusiastic about the potential for the versatile format to be adapted to different types of therapies.

"Antibodies are capable of being so specific, and you can tweak and tune them," Kaldenberg-Hendriks said. "With bispecific antibodies, we believe we can choose the affinities of both arms and balance them so that you can more specifically target tumors, and also recruit other cells or molecules to attack the tumor cells without many side effects. We really think it's the way forward."