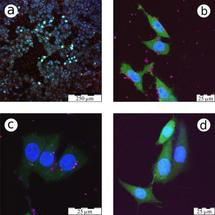 The group of Russian and French researchers, with the participation of scientists from the Lomonosov Moscow State University, has succeeded to synthesize nanoparticles of ultrapure silicon, which exhibited the property of efficient photoluminescence, i.e., secondary light emission after photoexcitation. These particles were able to easily penetrate into cancer cells and it allowed to use them as luminescent markers in the early diagnosis of cancer and in treatments of this disease.

Investigations to find methods for synthesizing such nanoparticles are actively conducted in many laboratories around the world, however, according to one of the study co-authors, professor of the Physics Department of the Lomonosov Moscow State University, Victor Timoshenko, the particles' quality was poor, mainly because they were synthesized by chemical reactions in acid solutions. 'The obtained particles were not sufficiently pure,' he says. 'By-products of the chemical reactions made them toxic. Furthermore, these nanoparticles had a form, which was far from a sphere, and it does not contribute to the appearance of the photoluminescence. These two drawbacks severely restricted their applications'.

To get rid of these shortcomings, the researchers decided to use a different method, with no positive results previously -- the so-called laser ablation, i.e. the ejection of atoms from the target with a laser beam, so that the torn atoms would form a nanocrystal then. The problem here was that the atoms torn in this case often did not combine to particles, but to some arbitrary layers, and even if the nanoparticles were obtained, they did not shine. It happened as either the nanoparticles were too large, or they cool down too quickly and did not have time to form high-quality nanocrystals. In other words, it was necessary to warm them, to encourage crystallization for a very short time.

'For that purpose, we decided to use high-intensity, short laser pulses,' Professor Timoshenko says. 'They not only ejected the silicon atoms from the target, but additionally ionized them. The emitted electrons led to the ionization of helium atoms, in which atmosphere it all was happening. In a very short time of nanoseconds something of a microwave kind appeared, laser plasma formed the conditions that allowed the atoms to sinter into spherical nano-crystals. These beads falling onto the surface aggregated as a fluffy layer, which subsequently could be readily dispersed in water'.

These nanoparticles had spherical shape and were just the right size -- 2-4 nanometers in diameter -- which, as physicists have well known, provided efficient photoluminescence where each falling photon is balanced with one ejected. In contrast to nanoparticles obtained by chemical etching, they were deprived of toxic additives. And most importantly, as demonstrated by biological experiments, they could easily penetrate into the cells. Moreover, into the cancer cells such nanospheres penetrate much more readily than into the healthy ones. This is due to the fact that the cancer cells are always ready to divide, always absorbs everything around to give rise to daughter cells. According to Victor Timoshenko, depending on the type of cells, cancer cells typically absorb nanoparticles 20-30% percent more efficiently than the healthy ones, and this can already lay a basis for the diagnostic of cancer at its' early stage.

'Our main achievement was that we produced such nanoparticles and established that they easily penetrate into cancer cells,' Victor Timoshenko said. 'The problem of the diagnostic is a separate task, which is solved simultaneously by biologists, with our participation. You can, for example, replace the analysis of biopsy, a fairly long and not too reliable "yes-no" test, in which the cancer cells in the body are detected by the fact whether a nanoparticle penetrated a tissue sample, or it did not. There are also non-invasive diagnostic methods. The photoluminescent light emitted from the nanoparticles in this case is difficult to use, but they can be activated by other means, for example, ultrasound or radio frequency electromagnetic waves'.

The main advantage of the obtained nanoparticles is that they are completely non-toxic and easily excreted. But their advantage is not reduced to that. They also can attach specific substance or group of biomolecules (e.g., antibodies) to their surface, allowing us to target them to penetration into cancer cells and thereby increase the efficiency of diagnosis. According to Victor Timoshenko, in the future those obtained nanoparticles will also have the drug attached, that will not only detect cancer, but also help to conduct a local chemotherapy or radiotherapy on the cellular level.