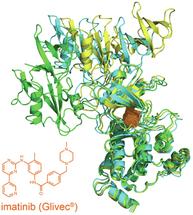 Currently no treatment option is available for five percent of patients suffering from chronic myelogenous leukemia, since they have developed resistance to conventional medications. Prof. Stephan Grzesiek’s group at the Biozentrum of the University of Basel, in collaboration with Dr. Wolfgang Jahnke and colleagues from Novartis, has investigated the combined action of two different compounds against this form of leukemia. They have been able to explain at the atomic level, how both substances alter the structure of an enzyme and how their combination potentially can overcome drug resistance.

Chronic myeloid leukemia (CML) is a form of blood cancer based on a genetic disorder that leads to the overproduction of white blood cells. Ninety-five percent of affected patients can be treated successfully with the Novartis drug imatinib, also known as Gleevec®. Imatinib is an inhibitor that blocks the ATP-binding site of the tyrosine kinase Abl in affected blood cells, thereby suppressing their overactivity. Consequently, the pathological overproduction of leucocytes is stopped and the blood count normalizes.

Five percent of all patients are not cured by imatinib

Why the drug combination works in resistant CML

Why such a combination of the two inhibitor types works in an animal model has now been explained by Prof. Stephan Grzesiek‘s team at the Biozentrum of the University of Basel and Dr. Wolfgang Jahnke from Novartis, by a structural analysis using nuclear magnetic resonance spectroscopy (NMR). Under physiological conditions, the tyrosine kinase Abl is found in two different spatial structures - an open and a closed state - which exist in a delicate equilibrium. The researchers have shown that the binding of imatinib unexpectedly shifts this equilibrium to the open state. Although the enzyme itself is inhibited in this state, it can be more easily re-activated through other tyrosine kinases. The allosteric inhibitor GNF-5, however, stabilizes the closed, inactivated state, and even recloses the imatinib-induced open state.

“Thus the inhibitory potentials of both drugs add together to suppress the kinase activity. Our structural analysis enables us to understand why GNF-5 contributes to overcome imatinib resistance,” explains Lukasz Skora, a former postdoc from Stephan Grzesiek’s lab. These results provide a detailed insight into how Abl kinase behaves under the influence of inhibitors, giving hope for a successful combination therapy.