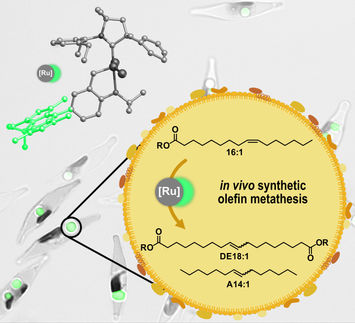 Catalytic olefin metathesis can be carried out in living diatoms. In this process, fatty acids stored in the lipid organelles of the algae are converted into polymer building blocks and chemicals.

Fossil raw materials are limited and not available and extractable everywhere in the world – as we are becoming acutely aware of right now by the example of fossil fuels and rising energy prices. Renewable raw material sources will therefore play an increasingly important role in the future: as energy sources, but ideally also as suppliers of building blocks for more environmentally compatible chemicals and materials.

In order to use renewable raw materials – such as plant oils – for the production of chemicals, they must first be processed and in some cases chemically converted. In the industry, this process is commonly referred to as refining. Up to now, complex processes were required to extract and separate the bio-raw materials from the cells in which they were produced, before the materials could be upgraded and further processed.

Expanding the natural machinery of cells

Doctoral researcher Natalie Schunck and Professor Stefan Mecking from the Department of Chemistry at the University of Konstanz have now opened up a way to make the step of upgrading sustainable raw materials much more efficient. They succeeded in introducing suitable synthetic catalysts, i.e. substances that bring about the desired upgrading reactions, into unicellular algae – specifically, to the site where they produce and store their lipids.

In their recent paper in Angewandte Chemie, the researchers describe how the catalysts were successfully transported to their destination. In addition, they provide evidence that the catalyst they have used remains stable in the lipid storage compartments of the algae cells and fulfils the anticipated task there: the conversion of the unsaturated fatty acids of the algae cells into modified, long-chain building blocks suitable for the production of sustainable chemicals. "By introducing the catalysts, we managed to add a chemical reaction to the algae's machinery that does not occur in nature but is highly relevant to the upgrading of oils and fats in the feedstock processing industry –olefin metathesis. The algae cells could thus be turned into tiny refineries," summarizes Mecking.

The microalgae Schunck chose are challenging, because they possess a cell wall that needs to be overcome. In order to still smuggle her catalyst to its destination, the researcher used a trick: She coupled the catalyst to a dye normally used to stain the lipid stores of algal cells. In this way she was able to ensure and also observe that the catalyst reaches its target. "Natalie Schunck succeeded in this very difficult experimental work due to her outstanding qualities as a researcher. This project required extensive expertise in chemistry and sound knowledge of biology, which she had both acquired in the Life Science study programme," explains Mecking.

Decisive advantages of such algae are obvious: They are photoautotrophic, using atmospheric carbon dioxide as a carbon source and sunlight as an energy source for the photosynthesis of complex chemical compounds, such as their fatty acids. This makes them promising candidates when it comes to finding renewable resource producers. "By expanding the functional spectrum of algae, we are now a step closer to using them in the long-term as a living microfactory for sustainable chemicals," Mecking concludes.