Change with age: As bats mature their immune cells differ 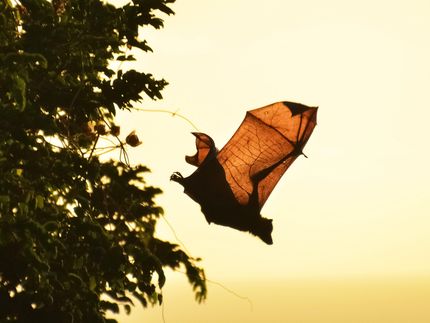 A team of researchers led by Anca Dorhoi at the Friedrich-Loeffler-Institut (FLI) and Emmanuel Saliba at the Helmholtz Institute for RNA-based Infection Research (HIRI), has elucidated age-dependent variations in cellular immunity in Rousettus aegyptiacus, known as the Egyptian fruit bat, a natural reservoir for filoviruses such as Marburg Virus. Using cutting-edge single-cell technologies, they mapped the bat blood with unprecedented resolution. The scientists unveiled that progression to adult age enriches for T lymphocytes and putative regulatory myeloid cells at expenses of B cells. These findings offer deeper insights into the immune system of an important wildlife reservoir species and are now published in Cell Reports.

Bat immunology remains mysterious. Many zoonoses originate from wildlife and several emerging, high-impact viruses are bat-borne. Despite harboring lethal viruses little is known about the bat immune system. The group of Anca Dorhoi together with colleagues at the Friedrich-Loeffler-Institut (FLI) in Greifswald and with the group of Emmanuel Saliba at the Helmholtz Institute for RNA-based Infection Research (HIRI) in Würzburg—a site of the Braunschweig Helmholtz Centre for Infection Research (HZI) in cooperation with the Julius-Maximilians-Universität (JMU) Würzburg—now mapped the complexity of circulating leukocytes in the Egyptian fruit bat and report that age imprints on frequencies and phenotypes of immune cells.

The teams focused on Rousettus aegyptiacus, a bat with a broad geographical distribution and reservoir for zoonotic viruses which is also employed as experimental model. FLI is one of the few research institutions worldwide having access to bat colonies which offers unique opportunities to study bat immunobiology. FLI immunologists teamed up with colleagues in Würzburg who are specialized in analysing the cellular RNA molecules and are equipped with advanced sequencing technologies. Emmanuel Saliba says: “We took advantage of the power of one, we performed single-cell sequencing using RNA molecules as a fingerprint of cellular identities of bat blood and gather the biggest map so far of bat cells.” This strategy permitted identification of elusive leukocytes, such as subsets of NKT-like cells and B cells, which do not overlap with known subsets from classical experimental models. Without high-resolution methods and in absence of experimental immunological tools identification of bat immune cells would have lagged behind. This effort represents the most comprehensive map of bat blood known to date.

The researchers used flow cytometry among other techniques and observed that T lymphocytes and phagocytes such as neutrophils and subsets of mononuclear myeloid cells were enriched in adult bats, while B cells were more abundant in juveniles. Anca Dorhoi concludes: “In Egyptian fruit bats immune cells gain putative regulatory phenotypes upon reaching adulthood and dramatically change their frequencies in blood.” The age-related observations suggest that the immune system may condition the reservoir function and support epidemiological studies to elucidate age-dependent pulses of zoonotic infection. These findings complement evidences for disease tolerance in bats, so far related to humoral immunity. Overall, the research takes a leap forward into bat cellular immunity.