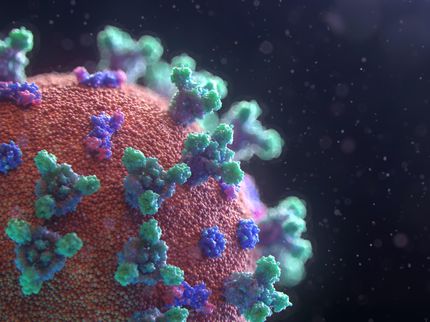 Researchers at ETH Zurich have developed a method to explore the possibilities of how the pandemic virus could evolve. Thanks to their work, it may be possible to develop antibody therapies and vaccines that are more likely to be effective also against future viral variants.

SARS-​CoV-2 is constantly mutating and each new variant often catches the world by surprise. Take for example the highly mutated Omicron variant that emerged last November and required health authorities to develop a rapid response strategy even though, initially there were no answers to important questions: How protected are vaccinated and previously infected people against the new variant? And are antibody therapies still effective against this new version of the virus?

Researchers led by Professor Sai Reddy from the Department of Biosystems Science and Engineering at ETH Zurich in Basel have now developed a way of using artificial intelligence to answer such questions, potentially even in real-​time immediately after a new variant emerges.

Exploring the multitude of potential variants

Since viruses mutate randomly, no one can know exactly how SARS-​CoV-2 will evolve in the coming months and years and which variants will dominate in the future. In theory, there is virtually no limit to the ways in which a virus could mutate. And this is the case even when considering a small region of the virus: the SARS-​CoV-2 spike protein, which is important for infection and detection by the immune system. In this region alone there are tens of billions of theoretical possible mutations.

That’s why the new method takes a comprehensive approach: for each variant in this multitude of potential viral variants, it predicts whether or not it is capable of infecting human cells and if it will be neutralized by antibodies produced by the immune system found in vaccinated and recovered persons. It is highly likely that hidden among all these potential variants is the one that will dominate the next stage of the COVID-​19 pandemic.

To establish their method, Reddy and his team used laboratory experiments to generate a large collection of mutated variants of the SARS-​CoV-2 spike protein. The scientists did not produce or work with live virus, rather they produced only a part of the spike protein, and therefore there was no danger of a laboratory leak.

The spike protein interacts with the ACE2 protein on human cells for infection, and antibodies from vaccination, infection or antibody therapy work by blocking this mechanism. Many of the mutations in SARS-​CoV-2 variants occur in this region, which allows the virus to evade the immune system and continue to spread.

Although the collection of mutated variants the researchers have analysed comprises only a small fraction of the several billion theoretically possible variants – which would be impossible to test in a laboratory setting – it does contain a million such variants. These carry different mutations or combinations of mutations.

By performing high-​throughput experiments and sequencing the DNA from these million variants, the researchers determined how successfully these variants interact with the ACE2 protein and with existing antibody therapies. This indicates how well the individual potential variants could infect human cells and how well they could escape from antibodies.

The researchers used the collected data to train machine learning models, which are able to identify complex patterns and when given only the DNA sequence of a new variant could accurately predict whether it can bind to ACE2 for infection and escape from neutralizing antibodies. The final machine learning models can now be used to make these predictions for tens of billions of theoretically possible variants with single and combinatorial mutations and going far beyond the million that were tested in the laboratory.

The new method will help develop the next generation of antibody therapies. Several of such antibody drugs were developed to treat the original SARS-​CoV-2 virus and approved for use in the United States and Europe. Among these, five antibody drugs were removed from clinical use and many others under clinical development were discontinued because they could no longer neutralise the Omicron variant. To address this challenge, the new method may be applied to identify which antibodies have the broadest activity.

“Machine learning could support antibody drug development by enabling researchers to identify which antibodies have the potential to be most effective against current and future variants,” says Reddy. The researchers are already working with biotechnology companies that are developing next generation COVID-​19 antibody therapies.

Additionally, the method developed at ETH Zurich could be applied to support the development of next generation COVID-​19 vaccines. The focus here is on identifying virus variants that still bind to the ACE2 protein – and can therefore infect human cells – but cannot be neutralised by the antibodies present in vaccinated and recovered people. In other words, variants that can escape the human immune response. This was indeed the case with the Omicron variant that escaped from most antibodies and this winter resulted in many breakthrough infections in vaccinated and previously infected people. Therefore, similar to antibody therapies, it is a major advantage if vaccines could induce antibodies that provide protection against potential future viral variants.

“Of course, no one knows which variant of SARS-​CoV-2 will emerge next,” Reddy says. “But what we can do is identify key mutations that may be present in future variants, and then work to develop vaccines in advance that provide a broader range of protection against these potential future variants.”

Finally, this machine learning method can also support public health, as when a new variant emerges, it can rapidly make predictions on whether antibodies produced by existing vaccines will be effective. In this way, it can accelerate the decision-​making process related to vaccinations. For example it may be that people who received a particular vaccine produce antibodies that are not effective against a new variant and should thus receive booster vaccinations as soon as possible.

Reddy points out that the technology could also be adapted for other circulating viruses, such as influenza, as predicting future influenza variants may support the development of seasonal flu vaccines.