A potential fountain of youth for the immune system 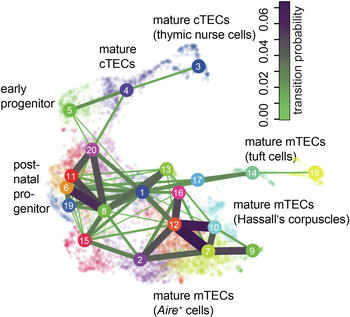 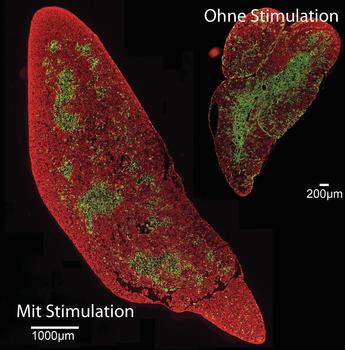 The fine tissue structure of the stimulated thymus organ does not differ from that of an unstimulated organ. As a sign of a well-functioning thymus, the marginal zones (red) and inner zones (green) are sharply separated from each other.

In old age, the performance of the immune system decreases, and older people are more susceptible to infections. Research teams from Würzburg and Freiburg have now discovered an approach that could be used to slow down this process.

The corona pandemic has made it clear: Older people are more susceptible to infections, suffer from more severe infectious diseases than young people, and they take significantly longer to recover. In fact, the capacity of the human immune system decreases continuously from around the age of 60.

The reason for this is known: "So-called T-lymphocytes play a central role in the recognition of pathogens and the protection against infections," explains Professor Dominic Grün, holder of the Chair of Computational Biology of Spatial Biomedical Systems at the Julius-Maximilians-Universität Würzburg (JMU) and member of the Würzburg Max Planck Research Group for Systems Immunology.

T lymphocytes are part of the acquired immune system. They develop mainly in the early years of life in the thymus, a small lymphoid organ located in the thorax behind the breastbone. "However, the thymus shrinks with age and allows fewer and fewer T cells to mature, with the result that the immune defense becomes weaker," says Professor Thomas Boehm, head of a research group at the Max Planck Institute of Immunobiology and Epigenetics.

Grün and Boehm have now jointly deciphered new details of the processes that take place when the thymus shrinks. Their findings, which the researchers present in the current issue of the journal Nature, could help to at least slow down the age-related decline in immune function and develop new therapies that reduce these risks of old age.

They have already done important preliminary work for this in the past decades. For example, Thomas Boehm's research group was able to identify the genetic switches that are required in the thymus for T-cell maturation. So-called thymic epithelial cells, which attract the T cell precursors and induce them to mature, are essential here. Earlier work in Boehm's laboratory had shown that the two main forms of the thymic epithelium arise from bipotent precursor cells. However, it was previously unclear whether there is more than one type of progenitor, and into how many subtypes the progenitors differentiate.

"In order to better understand why the thymus shrinks during life, a detailed understanding of its cell types is required," explains Dominic Grün. From the scientific point of view, it would be particularly interesting if so-called "naïve progenitor cells" could be detected in the tissue. These progenitor cells can mature into all epithelial cell types of the thymus and thus offer an important starting point to counteract the decline in thymic function.

Every single cell in focus

In fact, the two research groups have now succeeded in detecting such progenitor cells in the thymus of adult mice. Cutting-edge methods of single-cell biology were used - in particular the so-called mRNA single cell sequencing. Grün is one of the pioneers in this field and has developed customized bioinformatics methods in recent years to gain biological insights from these complex data.

Using CRISPR gene scissors and a transgenic "barcoding" mouse model developed in the Boehm lab, the teams also succeeded in marking all epithelial cells in the growing thymus with molecular "barcodes". Because these individual identifiers were passed on unchanged to all daughter cells in the course of life, the researchers were able to decipher the relationships of the daughter cells at different points in time.

The combination of single-cell and barcode sequencing established in the Grün laboratory finally made it possible to measure the molecular identities of the cells and their relationships simultaneously. Using this approach, the researchers were able to discover two progenitor cell types - a population that is primarily active during embryonic development and in the early phase of life, and a "postnatal" population with increased activity in adulthood, which is derived from this early progenitor.

A target for new therapies

"In this way, we have discovered different progenitor populations in the embryonic and adult thymus, which can differentiate into the various mature epithelial cell types of the thymus," Grün describes the main result of the now published study. These progenitor cells are essential to maintain tissue function and to support the development of T cells of the adaptive immune system.

By combining transgenic animal models from the Boehm laboratory with the single-cell methodology of Grün's research group, it was also possible to understand the effect of a method for the proliferation of thymic epithelial cells that has been known for years. The researchers were able to show that a certain growth factor maintains the progenitor population even in the ageing thymus and thus counteracts the age-related shrinkage of this organ. These findings may form the basis for the development of novel therapies that help to preserve the function of the immune system in old age.