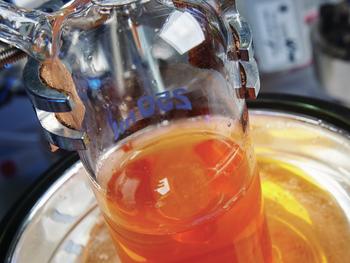 Synthesis of Catalyst in the Lab

Drugs that we take are chemically altered as they are degraded in the body. In the case of newly developed active ingredients it is important to know which degradation products (metabolites) are formed in the process, because these can be incompatible or even harmful. To detect such metabolites, chemists label the substances under investigation with the hydrogen isotope deuterium. This deuteration makes it possible to precisely track active substances as they are broken down and metabolized. At LIKAT in Rostock, Kathrin Junge's research group in the department of Matthias Beller succeeded in considerably simplifying the labeling of chemical compounds by means of a new catalyst.

"In a process known as deuteration, a certain number of hydrogen atoms in the drug are replaced by deuterium," explains Dr. Kathrin Junge. The difference between the two: While hydrogen has only a single proton in its atomic nucleus, the deuterium nucleus contains a neutron in addition to its proton.

Deuterium and hydrogen are, so to speak, siblings: isotopes of hydrogen. Chemically, both behave completely identically. Only physically do they differ due to the higher molecular weight of deuterium. This makes it possible to detect and analyze a deuterated drug at any stage of its degradation.

Cheaper and More Sustainable than Before

Chemists around the world usually use deuterium gas for deuteration. For this, they need catalysts that contain a precious metal, such as platinum. The team at LIKAT, on the other hand, uses deuterated water, D2O. This is cheaper and also more readily available than deuterium gas, as Dr. Junge says.

Her research group developed a catalyst specifically for this purpose. And it is also cheaper and more sustainable than has been the case in the past. "We use iron instead of the usual precious metals and use cellulose as a carrier material, which is waste from the wood industry."

The catalyst works, and this is another difference, "very selectively," as Kathrin Junge explains. That means, it ensures that not all hydrogen atoms in the molecule are replaced by deuterium, but only at certain positions in the molecule.

Molecular labeling using deuterium not only helps to elucidate the degradation mechanisms of active ingredients. As pharmacists have discovered, deuterium can significantly enhance the effect of drugs. In 2017, the U.S. Food and Drug Administration (FDA) released the first deuterated drug. Since then, the field has become a hot topic in chemistry research, says Kathrin Junge.

At LIKAT, Dr. Wu Li was mainly involved in the project. He was supported in the laboratory by Florian Bourriquen, a PhD student at LIKAT. Both have been able to demonstrate that their method works not only for a selected model substance, but for a wide range of substances. They tested around 90 compounds, including natural substances such as amino acids and DNA nucleotides, hormones such as melatonin and estradiol, and pharmaceutical agents such as thyrosol for hyperthyroidism and the antiseptic thymol.

The reaction mechanism for deuteration by means of D2O as well as the structure of the deuterated substances were elucidated by analysis groups at LIKAT.

Method for Improved Effect of Drugs

Assessing the medical effect of such deuterated substances is a matter for pharmaceutical research, says Dr. Kathrin Junge. With the results from LIKAT, a method is now available that is much easier to implement than the previous procedure. In the future, such aspects (including sustainability) would play a much greater role in drug approval procedures than they have in the past.