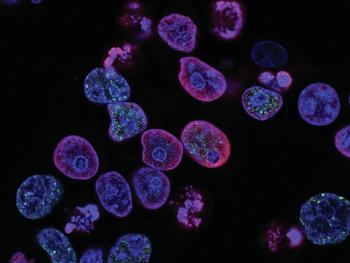 The new technique could revolutionise the crucial early diagnosis of some of the most debilitating and life-threatening diseases, including cancer (symbolic image).

Scientists have developed a pioneering new technique to barcode individual cells more accurately and efficiently - which could help pave the way for quicker disease diagnosis.

A team of researchers from the Living Systems Institute at the University of Exeter has created a new method, that combines artificial intelligence with microfluidics, that can easily classify, sort and count individual cells.

The ground-breaking new technique allows scientists to carry out intricate and in-depth analysis of single cells, including mammalian cells, in real-time.

Previously, there have been no general methods to accurately sample and barcode isolated single cells without large wastage during the sampling process.

This new approach, however, allows scientists to barcode individual cells much more accurately and efficiently than before to quantify their molecular make-up – a crucial development as disease often comes from the malfunction of a few cells.

The new technique could revolutionise the crucial early diagnosis of some of the most debilitating and life-threatening diseases, including cancer.

Dr. Fabrice Gielen, principal investigator of the research group from the Living Systems Institute said: “With the technology we have developed, we have the opportunity to advance our understanding of the origin of differences observed between cells in a population.

"These differences are seen at the molecular level and are especially large during key cell stages such as differentiation into specialised cells, but can also be indicative of early cancer development.

"We have applied our tool for screening of thousands of single cells from real-time imaging data and efficiently barcode them with minimum cell waste.

"We are currently applying this tool to screen miniature in-vitro tumours formed from model neuroblastoma cells to understand why cancer progression appears to be highly unpredictable in clinical settings. This may lead to early diagnostics and the use of targeted therapeutics.

"Our technique being generic in scope, we also foresee plenty of further opportunities enabled by real-time image analyses such as the study of bacterial biofilm formation and the degradation of plastic microfibers by biocatalysts."