Remarkable and unexpected insights into the workings of the biological system: Quantum chemical calculations illuminate excited states of chlorophyll molecules 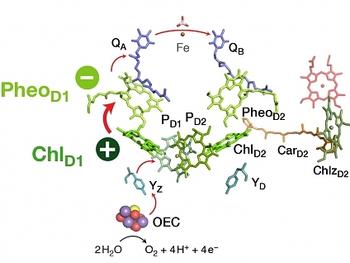 The sun sustains all life on earth through photosynthesis, the process by which plants and other organisms convert the energy of sunlight into chemical energy, stored in the bonds of organic molecules. A central challenge of modern science is to replicate this process using synthetic catalysts, and thus produce solar fuels by artificial photosynthesis. Understanding how nature achieves the conversion of sunlight to chemical energy is essential to guide and inspire technological solutions. However, although a lot has been known about the enzymes that perform this amazing feat (called photosystems) and about their important components (chlorophyll molecules), the details of how the energy of sunlight is converted into the flow of electrons that powers chemical reactions have remained shrouded in mystery. Now, a groundbreaking new study by researchers in the Department of Molecular Theory and Spectroscopy provides remarkable and unexpected insights into the workings of the biological system.

Using multiscale simulation methods and state of the art quantum chemical calculations, Dr. Dimitrios Pantazis and his group investigated the excited state properties of the chlorophyll molecules contained in the enzyme Photosystem-II. Their study managed to identify for the first time the specific pair of redox-active cofactors, a chlorophyll and a pheophytin molecule, responsible for converting the excitation energy of sunlight into a charge-transfer excited state, the precursor of all subsequent chemical transformations. Moreover, the study showed that the special behavior of specific chlorophylls and the directionality of charge separation are not the result of intrinsic properties or of the spatial arrangement of chromophores, as previously thought, but they arise and are controlled exclusively by the electrostatic field of the surrounding protein.

These discoveries have fundamental implications not only for understanding the biological system but also for designing synthetic mimics. They demonstrate that the matrix in which light-sensitive chromophores are embedded can be functionally more important than the chromophores themselves, causing emergent charge-transfer behavior and directionality within the combined system that is beyond and above the intrinsic properties and capabilities of its individual components.