Software finds "needle in a haystack" e.g. in the diagnosis of rare diseases 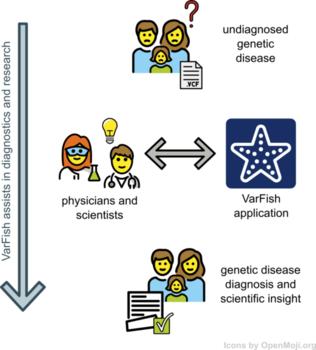 A serious illness is often the result of a single genetic defect. But given that two healthy people already have around three million differences in their genetic make-up, it is no easy task to pick out the one disease-causing deviation from the many harmless gene variants. Scientists at the Bioinformatics Core Unit of the Berlin Institute of Health (BIH) joined forces with colleagues from Charité – Universitätsmedizin Berlin and the Max Delbrück Center for Molecular Medicine in the Helmholtz Association (MDC) to develop a software that helps locate this genetic “needle in a haystack” – which is particularly important in the diagnosis of rare diseases. The resulting software “VarFish” is freely available and is explained in the latest issue of the journal Nucleic Acids Research.

Rare diseases are not necessarily that rare: They affect some four million people in Germany alone. But of the estimated 8,000 different diseases that fall into this category, there are usually only a few recorded cases of each one. As a result, it can take years for those affected to receive the correct diagnosis – and yet this is a prerequisite for effective therapy. “The parents of affected children often end up sitting across from us after a long and arduous journey,” says Dr. Nadja Ehmke, a specialist at the Charité’s Institute of Medical Genetics and Human Genetics. “They have a sick child who is not developing properly, either mentally or physically, and they want to know why. If we can use a genetic analysis to explain to them where the defect lies, this is often a huge relief for the parents – even if it does not necessarily mean anything can be done for their child in terms of treatment.” Such knowledge enables parents to exchange information with others in the same situation, to visit or set up self-help groups, and to better assess whether another child could also fall ill.

To conduct the genetic analysis, scientists isolate the genetic material from patients’ blood cells, read the sequence – i.e., the order of letters – and compare it with the genetic material of parents, siblings or existing genetic analyses in large databases. “This is where humans reach their natural limits,” reports Dr. Dieter Beule, head of the BIH Bioinformatics Core Unit. “Even if we only analyze the protein-coding regions of the genetic material, the so-called exome, there are millions of building blocks to compare. We require powerful software to detect the differences.” But even in the genetic material of two healthy individuals, there are around 30,000 positions in these coding regions (alone) that differ. Which of the many variants is the cause of the illness? This was the very question that motivated Dieter Beule and his team to develop VarFish. VarFish compares the patient’s sequence with sequences from worldwide databases. The Bioinformatics Core Unit scientists made use of many open and free data resources, including the U.S. databases of the National Center for Biotechnology Information (NCBI) at the University of Washington in Seattle, and the European Bioinformatics Institute (EBI) in Cambridge, UK, as well as Charité’s and the BIH’s own databases and algorithms.

“In a matter of seconds, VarFish can eliminate 29,950 of the 30,000 differences,” explains Dieter Beule. “This is because the software finds many of the same deviations, for example, in the sequences from population samples, where it apparently does not lead to noticeable problems and is therefore in all probability not responsible for the rare disease.” The scientists can then compare the remaining 50 gene variants with known hereditary diseases, thus narrowing down the group of possible culprits to about ten genetic mutations.

In some cases, scientists may also discover mutations in a known gene during their research. “VarFish enables rapid testing for mutations in known genes,” explains Professor Ute Scholl, who holds a Johanna Quandt Professorship at the BIH. “This is important, as it can give us clues as to which drug may be able to help and should be studied further in clinical trials.” If there are no mutations in known genes, VarFish can be used to identify a new candidate gene within a larger family or by comparing several affected families with the same disease. The outcome produced by mutations in such a candidate gene can then often be determined in the laboratory. Ute Scholl’s lab introduces the mutated genes into cell cultures or mice and observes what effects the mutation has. “Using this method, we have recently characterized a new gene for a rare inherited form of high blood pressure,” reports the physician. But drug development and even targeted treatment are still some way off: “First, we want to understand how the disease develops in the first place and where the symptoms originate.”

Dr. Manuel Holtgrewe, lead author of the paper, is delighted that the new software is finding so many users: “In just the first few weeks, VarFish has been used hundredfold by scientists and doctors around the world. In our own laboratory we analysed thousands of data sets with the help of VarFish.” International cooperation is particularly important in the research and treatment of rare diseases, as each individual mutation usually occurs only a few times in each country. Professor Stefan Mundlos, head of the Institute for Medical Genetics and Human Genetics at Charité and the Development and Disease Group at the Max Planck Institute for Molecular Genetics in Berlin, reports: “VarFish has been very helpful in enabling us to quickly and accurately diagnose participants for our clinical trials.”

Manuel Holtgrewe and Dieter Beule are now planning to expand VarFish so as to enable the genome-wide analysis of so-called structural variants. In addition, further functions will be added for the effective and safe cross-locational collaboration of human geneticists. “VarFish supports users in the analysis of their molecular genetic data in both basic research and clinical application,” says Dieter Beule. “The core mission of the BIH is translation – which involves transferring results from research to the clinic and, vice versa, bringing clinical observations back to the lab. With our software VarFish, we are supporting this very goal.”