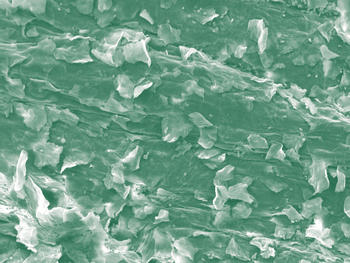 The shedding of cells from the mucosal surface, here made visible with the help of a scanning electron microscope, is similar to the falling of leaves from trees. The shedding of the cells is therefore also termed exfoliation. Some mucosal areas in the human body can greatly increase exfoliation upon bacterial infection and thus prevent colonization by microorganisms. University of Konstanz scientists now show how specialized pathogens can thwart this defence mechanism.

Specialized pathogens do not only passively stick to the human mucosa. As a research team at the University of Konstanz has now discovered, they also use the gas nitric oxide (NO) to communicate with their host at short distances to reinforce a firm anchoring of the infected cells in the mucosal tissue. This is the first time that a gaseous messenger is identified as a means of communication between bacteria and humans.

Every infection starts with a race: If the pathogen is able to establish and multiply faster than the host organism can control it, disease sets in. If the host manages to impede the pathogen’s progress until the immune system is running at full speed, the pathogen can be stopped in time. For bacteria and viruses, which target our mucous membranes, this race begins directly with their attachment to the surface of the mucosa. If the pathogen’s attachment factor, the adhesin, matches a molecule on the host cell, for example, a human mucosal cell, then the microorganism can cling to this molecule, called the receptor. If the pathogen does not find a suitable receptor, for example because it ends up in a horse instead of in a human, it cannot attach itself and is removed by mucus transport in the nose and throat, the flow of tears and blinking of the eye, or urine flow in the urinary tract, respectively. However, mucous membranes have another way to get rid of already attached pathogens: The shedding of the superficial cells, also known as exfoliation, a process in which the uppermost cell layer is discarded.

With this defence mechanism, our body can still eliminate pathogens that have already attached or penetrated into our cells. This phenomenon is particularly impressive on the mucous membranes of the genital tract or in the urinary bladder. As the work of Dr Petra Münzner from the laboratory of cell biologist Professor Christof Hauck had already shown, some specialized pathogens are capable of suppressing exfoliation. This affords such microbes with a strong advantage in colonizing their host. Now, for the first time, the researchers were able to discover that the suppression of exfoliation is based on a special trick of the pathogens: These bacteria produce the gaseous substance nitric oxide (aka. NO or nitrogen monoxide), which, as a signal molecule, triggers a fixed programme in the mucosal cells. As a result of their exposure to NO, the infected mucosal cells anchor themselves even more tightly in the tissue. Instead of exfoliating, the uppermost cell layer of the mucosa remains stable and allows the pathogens to stay on the host surface for a prolonged time.

“The discovery that the bacteria use the gas nitric oxide to suppress exfoliation was a surprise. However, with the NO signalling pathway in our cells being well understood, we were able to interrupt this communication pathway between microbe and human cell with already existing inhibitors and thus deprive the bacteria of their advantage again,” said Christof Hauck. In the murine model, the researchers could show that administration of such inhibitors re-enabled exfoliation in the presence of the bacteria, thereby preventing colonization by these pathogens. In the race between microbes and humans, humans may thus regain the decisive advantage and thereby elegantly prevent an infectious disease.