By coupling a bacterial injection system with a light-controlled molecular switch, scientists are able to inject proteins into eukaryontic cells 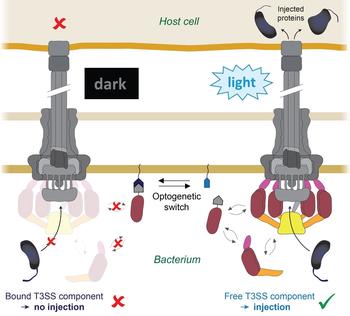 Molecular principle of the LITESEC system. In the dark (left), a T3SS component, which is necessary for the injection (red), is anchored to the bacterial membrane. As soon as the bacterium is illuminated (right), the component is released. Thus, the T3SS becomes active and proteins can be injected into the host cell (top). 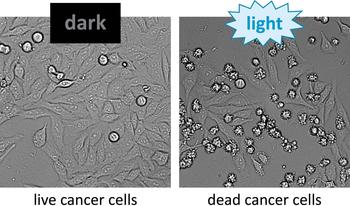 Left: Cancer cells incubated with LITESEC bacteria, which inject a pro-apoptotic protein and can thus lead to cell death. Right: Under illumination, many star-shaped dead cells be seen after one hour.

When bacteria such as Salmonella or Yersinia cause fever, diarrhoea or abdominal pain, tiny "injection needles" are at work: their type 3 secretion system, or T3SS for short, shoots bacterial virulence proteins directly into the eukaryotic host cells. Researchers have thought of using bacterial injection devices to introduce proteins into eukaryotic cells. A Max Planck research team has now succeeded in controlling the injection system optogenetically, i.e. with light. In the future this will enable to use the system in biotechnological or medical applications.

The T3SS is essential for virulence in many important human pathogens, including Salmonella, Shigella, and pathogenic Escherichia coli, that cause several millions of deaths per year. It is also important in hospital infections, for example by Pseudomonas aeruginosa, where presence of a functional T3SS is associated with higher mortality in animal models and increased antibiotic resistance, severe disease, and a bad prognosis in infected humans.

Consequently, the T3SS is considered a central target for potential therapeutics that could impair its function and prevent infections. On the other hand, hijacking this bacterial system would offer the chance for controlled protein delivery to host cells through the T3SS, like in a trojanic horse. Protein injection through T3SS is fast and efficient: a single injectisome can transfer several thousand effector proteins in few seconds.

However, as powerful as the T3SS injection system is, it is far from accurate - much to the disappointment of the researchers. „As soon as a T3SS contacts any host cell, it fires its load immediately. This is unfavourable for applications in biotechnology or medicine, where we want to target specific cell types, for example in tumour therapy“, says Andreas Diepold, Research group leader at the Max-Planck-Institute for Terrestrial Microbiology in Marburg.

But now Andreas Diepold and his team have come a big step closer to this goal: they succeeded in controlling the T3SS injectisome using a molecular light switch. This will enable scientists to inject proteins into eukaryotic cells at a precise time and place. „During my postdoctoral fellowship in Oxford, I discovered that some parts of the T3SS are dynamic“, Andreas Diepold recalls. „They are constantly exchanged between this apparatus and the interior of the cell.“  The scientist applied his findings to the young research field of optogenetics. The principle of this technique is that protein interactions can be controlled with millisecond speed by changing their conformation when stimulated with light of specific wavelengths, thus allowing a fast and specific control of defined molecular processes in biological systems.

Doctoral fellow Florian Lindner coupled the dynamic T3SS component with one part of this optogenetic interaction switch, while its other part was anchored to the bacterial membrane. By exposing bacteria and host cells to blue light, the availability of the T3SS components and consequently the function of the T3SS could be switched on and off.

Since the system is flexible in regard to which kind of proteins are injected, it can be used in many ways. In a collaboration with Thorsten Stiewe from the Philipps University in Marburg, the research group used the new system to attack and kill cultured tumour cells. The group now plans to use this technique for future basic research and for the development of further applications.