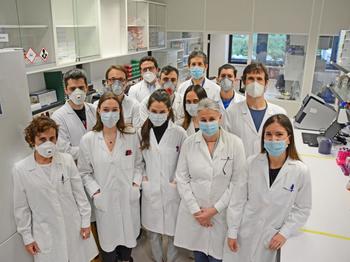 Cima Universidad de Navarra researchers have developed a large-scale, highly sensitive COVID-19 diagnostic platform more efficient than the commercial PCR test kits currently available. It consists of a ribonucleic acid (RNA) extraction method which allows large quantities of samples to be processed in parallel, independent of commercial extraction test kits. Cima researchers have confirmed that this protocol offers more than 95% sensitivity to detect asymptomatic cases and they have made it available to the scientific community for free online (see link on the right).

Scientists have estimated that, currently, the majority of the population is not immunised against the SARS-CoV-2 virus. According to the researchers, these people would not present detectable antibodies in their blood with serological tests. Serological rapid kits that detect IgM type antibodies (very early phase) or IgG type antibodies (immunised individual) have a variable sensitivity. Serological tests can detect the immune response in the organism, but they cannot detect the presence of the virus in the pharynx. In the first five days of the disease, patients can be completely asymptomatic, with no antibodies and with a high viral load in the pharynx, and so be highly contagious viral carriers. However, there is a disease phase in which the patients have antibodies but also have viral particles in the pharynx or other organs, thus making them potentially contagious.

Polymerase chain reaction (PCR) is a technique that enables the detection of RNA from the SARS-CoV-2 virus in biological samples. Although there are several standard PCR protocols designed by entities such as the Charité Hospital (Germany) or the American CDC, all of them depend on RNA extraction as the first step. This step is one of the main bottlenecks in the detection process, as the current RNA extraction methodology has limited processing and does not allow for the testing of large populations.

Both rapid tests and PCR testing are significant for scenarios such as the easing of lockdown measures. It is vital to rapidly detect asymptomatic carriers in the first days after such easing so that we can avoid further pandemic relapses.

Cima's technique will enable full sampling to detect cases of COVID-19 (both symptomatic and asymptomatic) in groups of interest such as nursing homes and companies. Dr David Lara-Astiaso, director of the Genomics Unit at Cima Universidad de Navarra, has moved from the University of Cambridge to promote this project in Spain. He explained: 'At the Weizmann Institute in Israel, I accumulated years of experience analysing RNA expression profiles in large sample cohorts using "high capacity" technologies. I also developed new technologies to be able to carry out this type of study in very few samples, even in individual cells. Given the current situation caused by COVID-19, we decided to apply that knowledge to simultaneously test hundreds or thousands of samples in search of the SARS-CoV-2 coronavirus RNA.'

It is not clear that the presence of antibodies - or at which level - guarantee immunity to new COVID-19 infections. Dr Josepmaría Argemí, a researcher at Cima and a Hepatology specialist at Clinica Universidad de Navarra, said: 'We have to ensure that large populations can be tested using PCR high efficiency platforms like ours. This is a crucial element to prevent a re-emergence or second wave of COVID.' Dr Argemí is one of 13 volunteers who have participated in this project.

The Cima team, led by Drs Lara-Astiaso and Argemí, has put itself in the hands of the Spanish authorities to test the population and required communities and, in this way, assist the easing from the COVID-19 lockdown in the most precise, fast and safe manner possible.

Cima's methodology improves the RNA extraction process currently performed prior to COVID detection using RT-PCR. Dr Lara-Astiaso explained: 'Normally, commercial test kits require a manual extraction procedure, based on the use of columns and centrifuges. With our system, the extraction of RNA is done on 96-well plate samples. No centrifugation is needed because we use magnetic beads that bind RNA. That allows researchers to use a magnet that draws the beads to the side of the tube and quickly purifies the RNA from many samples automatically.'

Once scientists have extracted the RNA, it is used in a quantitative PCR reaction (or RT-qPCR) that detects the presence of viral RNA and even enables the approximate viral load present in the sample to be determined. Cima researchers have used a Perkin-Elmer instrument to automate this process, allowing them to process 384 samples in less than two hours.

As Dr Argemí explained: 'A team of four Cima scientists can currently analyse 1,920 samples a day, but these numbers can be scaled based on the available PCR machines and with only a few more staff. Another great advantage of this process is that the amount of reagents used is lower than the usual COVID detection protocols'.

Moreover, thanks to the donation of the Ramón Areces Foundation, Cima has incorporated a Bravo multichannel robot from the Agilent company which will fully automate this process and practically double the sample processing capacity with minimal personnel intervention. This robot reduces time, increases reproducibility and reduces the possibility of human error or contamination from one sample to another.