A key to new drugs 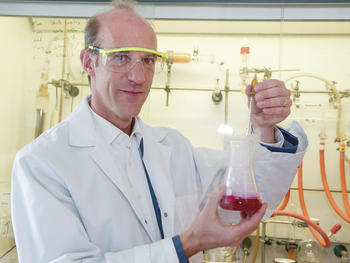 Nils Metzler-Nolte cooperated with his colleague Seth Cohen from the USA, who was a guest of the RUB Research School in Bochum.

A collaboration between research teams in Germany and the USA furnished a new concept for discovering drugs to treat life-threatening illnesses such as cancer, influenza, or multidrug resistant bacteria. The team proposes that three-dimensional metal-containing molecules may function as new building blocks. By adding additional functionality, these metal-containing building blocks can be developed towards drug molecules, as described by the teams of Professor Nils Metzler-Nolte from Ruhr Universität Bochum (RUB) and Professor Seth Cohen from the University of California at San Diego (UCSD).

The special feature of the metal-containing molecular building blocks in this work is their three-dimensional shape. Most organic compounds that form drugs on the market today are either linear or flat. “Think of these molecular building blocks like keys that need to fit in a keyhole. Most keys today are flat and only will fit in ‘conventional’ locks. But for other locks we need keys of different shapes.”

The unique three-dimensional shape of those molecular building blocks originates from central metal ions which are connected in all three dimensions to organic molecules, or so-called ligands. This allows the metal-containing molecules to bind to biomolecules important for treating illnesses.

Some considerations were important for the choice of the metal-containing building blocks. They should not be too big so as to be versatile enough to interact with a multitude of different targets initially. Then, they should have sites for further functionalization so as to eventually make them specific for a certain biological target. “Our compounds are not yet drug molecules by themselves” explains Nils Metzler-Nolte. “Rather, we are presenting a concept of how to reach a wider chemical space in shorter time, that will enable discovery of new drugs in the future.” This is just like a locksmith would shape a key blank to make it fit a specific lock, in this case one that cannot yet be opened with the conventional, flat keys. “We hope that in 8-10 years time, some of these building blocks would find their way into new drugs that are providing life-saving cures for human health” says Seth Cohen.