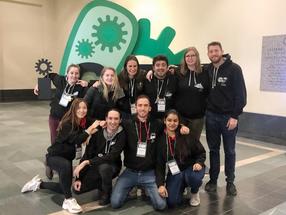 TU Dresden team at the iGEM Giant Jamboree in Boston

The student project DipGene developed a new methodology that makes genetic testing as easy as a pH-test. With their simple, cheap and low-tech method to test for the presence of any DNA sequence, they won a prestigious Gold Medal.

A student team of the TU Dresden successfully showcased their DipGene project at the annual iGEM Giant Jamboree, the synthetic biology’s largest innovation event, which is hosted by the International Genetically Engineered Machine (iGEM) Foundation. The Giant Jamboree is the culminating event of iGEM’s annual, worldwide, synthetic biology competition for students to use genetic engineering to solve local problems all around the world. The TU Dresden team was able to win a Gold Medal for their overall achievements.

Each year, the competition brings together more than 6,000 participants from across the globe to explore and create unique applications of synthetic biology with the mission to bring positive contributions to their communities and society at large. Beyond the technology, participants are evaluated on teamwork, responsibility, entrepreneurship, sharing, safety and more.

This year’s TU Dresden team consisted entirely of team members from two masters’ programs of the Center for Molecular and Cellular Bioengineering (CMCB), with nine members from seven different countries, namely India, Spain, Russia, Germany, Iran, Colombia and Ecuador. With DipGene, they focused on the development of a DNA sequence-specific diagnostic method that is applicable in the field. They could show that their method can be applied for bacteria, as well as human genomic DNA, for example for the detection of predisposition to monogenic diseases. For application in bacteria no amplification is needed, the method only takes five to ten minutes and is therefore much faster and cheaper than commonly used laboratory techniques, like polymerase chain reaction (PCR) followed by gel electrophoresis. It could be used in the lab during genetic manipulation of bacteria, to faster verify correct clones. In future research they hope to overcome the need for an amplification step by extracting genomic DNA from blood rather than by buccal swap. This way their method could be applied anywhere by anyone without the need for laboratory equipment.

“This year’s Giant Jamboree was a spectacular display of hard work and ingenuity. These students are showing the world what’s possible when we fearlessly tackle tough problems and open our minds to new applications of engineering biology,” said Randy Rettberg, co-founder and president of iGEM. “Many of the projects presented at iGEM will serve as the foundation and inspiration for important research, influential companies and international interest to come – these participants are most certainly tomorrow’s leaders.”
The three supervisors from the CMCB and the Faculty of Biology Dr. Frank Groß, Prof. Thorsten Mascher and Philipp Popp are very excited about the spirit and the success of the team. “Developing novel scientific ideas from scratch and having to go through each and every process of project development shapes young scientists tremendously – this opportunity in the frame work of the iGEM competition makes it a unique experience for everyone involved,” said Philipp Popp, who participated in iGEM himself in 2014 and already supervised the 2017 team of the TU Dresden.